Sonic the Hedgehog Revelation (or Sonic Revelation) is a hack of Sonic 1 by Animemaster. This hack has many features and will continue to increase them, while the product is under way. It also plans a new zone, made of instruments known as music land. Although the creator hasn't decided on whether the art would be good enough yet. The hack contains the three hedgehogs Sonic, Shadow, Silver as they join to face Eggman once again.

Sonic's world is yet again under threat by Eggman, as he has found a way to travel through time, by the use of his new machine mecha shadow. And with the use of this new and improved machine collected the 7 Chaos Emeralds in the future to take over both worlds and to corrupt them as we know it. Sonic once again rises from his feet, using his incredible fast speed to once again stop eggman in his tracks. But this time it will take more than Sonic alone to stop Eggman. Sensing the Chaos Emeralds, Shadow joins Sonic in an attempt to reclaim the Emeralds. While Silver's world is now in danger due to Eggman, he has traveled back in time again, to help Sonic stop Eggman from ruining both worlds, and restoring the future Emeralds to the future. 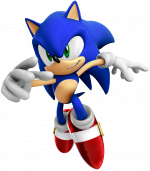 Sonic the hedgehog is a 15 year old blue hedgehog known for his super fast speed. He is always looking out for his friends puting them before himself, and stopping Eggman at all costs. He is a carefree creature, who is cofident in his self. All though he is fast on land, Sonic's worst fear in the water as he can't swim or use his super fast speed, revealing one of Sonic's weaknesses.

DISTINGUISHING FEATURES: Sonic's Red Power Sneakers, that were invented by Dr. Ovi Kintobor to protect him from the heat that the soles of his feet generate. Sonic first turned blue when he ran at the speed of sound. Supersonic shock waves made his quills blue hot and he remains that color through today. By using the 7 choas emerald, Sonic is able to transform with 50 rings into Super Sonic, making him temporary invincible, while enhancing his speed even more and his strength. 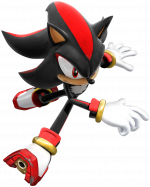 A black hedgehog known as the 'Ultimate Life Form' created by Prof. Gerald Robotnik. His only friend was Maria, and his purpose was to get revenge on the humans for killing Maria. After help from Sonic and his friends, in Shadow's first appearence 'Sonic Adventure 2' he now controls his own life, and consider himself alone. Although he joins sonic and his friends when facing Eggman. Shadow's fast speed seems to equal Sonic's due to his jet pack like shoes increasing his normal speed, compared to with out them. By using the Chaos Emeralds he can also turn into his super form known as Super Shadow, but can also use the Emeralds to do moves like 'chaos control' enabling him to travel through time faster than Sonic's speed could ever reach. And the use of 'chaos blast' as seen in 'Shadow the hedgehog' enables him to cause tremendous power in a wave of explosion obliterating his enemies.

This silver hedgehog hence his name Silver, is a hedgehog also but from the distant future who had first traveled through time in 'Sonic the Hedgehog' because he was told that Sonic was the cause of his worlds terror and destruction by Mephiles. Silver has telekineses powers, enabling him to move objects with his mind, and himself enabling sliver to fly through the skies. His normal purpose is to track down Eggman Nega who also comes from his time to stop his plans to destroy his world. As the others, he also has a superform with similar capabilities. 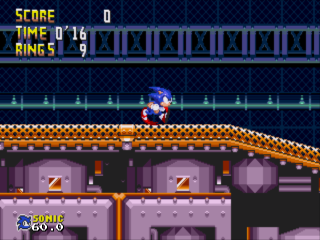 Tropical falls Zone - A beautiful paradise, amongst the tropical falls here the first zone in which you will encounter Eggman and his robots.

Frozen Maze Zone - A cold and chilling ice sanctuary, with a maze to boot. Sonic's got to watch out here as his worst fear of water is about to come true!.

Collision Chaos Zone - A colourful zone, full of springs and pinballs for Sonic to bounce around on. This collision crazy mayhem may drive you crazy here.

Speed Park Zone - Night time carnival is on, sadly Sonic has no time for the carnival as he must speed through ramps and loops as fast as he can in order to catch up with eggman.

Flying Battery Zone - Eggmans base in the skies. Surely this is the final round with eggman? or is it. You can be sure that Eggman won't make it easy for you here, so be sure to be on your toes.

Music Land (secret level???) - This is a Hidden zone, currently known as Music Land where there will be drums to run on, tubes to loop round on dangerous musical notes to point through Sonic. Whats Eggman up to in this magical world?