Sonic 1: WTF LAME is a 2009 fan-made joke hack of the original Sonic the Hedgehog game for the Sega Mega Drive. The game plays like the original, but there are special WTF LAME monitors added to each level. 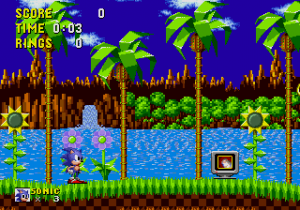 Activating a WTF LAME monitor will cause the level to fade out, and then the screen will be filled with a scrolling tl;dr rant that you cannot escape. The scrolling text is achieved by writing character data to the scroll plane every 8 scanlines, resulting in a smooth scroll. (For full details on how this works, see wtflame.asm in the source code archive.)

Once the scrolling rant has finished, a Game Over screen will appear saying "Sorry...you have just lost The Game. Try again." and the game will reset.

It is actually impossible to beat this hack normally, since Sonic will hit a WTF LAME monitor during the ending credits demo.

Apart from the new monitors, entering a special stage at the end of a level will also trigger a rant and a Game Over.