ChimpoQ! is an original hack based on the engine of Sonic the Hedgehog for the Sega Mega Drive. The game focuses on the original character Chimpo as he travels through one new zone with three levels. For the first level, Speed Slider from Knuckles Chaotix for the 32X has been imported. 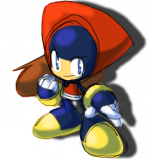 Chimpo is a super robot with incredible amnesia due to hardware failure. He didn't even know he was a robot to begin with. His exact reasons for destroying all the other robots on the island is unknown other than to fulfil his own enjoyment. Seriously hates frogs.

New layout for levels has been added, along with new sprites for the character, enemies, level background, etc. The title sprite has not been changed however, only the background. ChimpoQ! also has a Spin Dash-like attack.

The level select cheat is intact, but the levels are either jumbled or non edited.