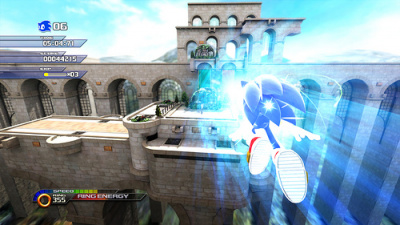 The Sonic Boost is a move utilized by Sonic the Hedgehog in newer Sonic titles starting with Sonic Unleashed, and is closely related to the Burst Dash from Sonic Rush. It is a rapid-acceleration move which allows Sonic to travel at vastly increased speed, activated by the

button on the PS3 and PS2 versions, and by swinging the Wii Remote on the Wii version.

Boosting has several major effects, the most obvious being that Sonic goes much, much faster; while Boosting, the edges of the screen even blur in order to accentuate the effect. Sonic also becomes surrounded by a blue-white shock front, capable of smashing Egg Fighters or small obstacles out of the way and send them flying. Thirdly, Sonic's wake pulls in rings behind him, an effect much like the Lightning Shield from earlier games. This is doubly useful because using the Sonic Boost consumes Ring Energy, which is replenished when rings are collected. Finally, the Boost enables Sonic to hydroplane over the surface a body of water; important for crossing between islands in Jungle Joyride.

If Sonic crashes into a solid wall while Boosting, he falls over and will take several seconds to get back up. Creative use of the Boost and jump platforms can enable Sonic to travel immense distances in midair; a fact extensively exploited by Sonic Unleashed speedrunners.

In Sonic Colours, the move returns once again, but this time the move is not permanent. Instead of being fueled by Rings, it is tied to the White Wisps found in containers, making it more of a power-up than a move. This forces the user to be more cautious on when and how to use the boost, and allows the levels to be designed around more platforming than pure speed.

It returned again in Sonic Generations, and the Boost Gauge is now refilled by both rings and defeated enemies.