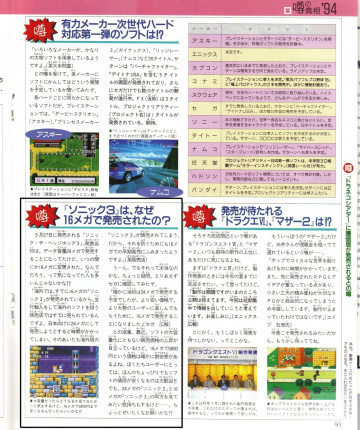 Game Preview - Sonic 3 is a short one-page feature of Sonic the Hedgehog 3 in an issue of the Japanese "Famitsu" magazine. The actual Sonic 3 article is on the bottom left side of the page. It mentions the early release of the 16 meg Sonic 3. Apparently, the release was being held off for release of a 24-meg game in Japan, but due to importers selling the US version in stores Sega of Japan decided to release the same version there instead. The 24 meg version is a reference to the cancelled Sonic 3 Limited Edition.

(Translation provided by Kat, the original translation can be found

Sonic 3 is set to be released on May 27. Initially announced to be 24 megabit, it seems to have quietly been changed to 16. Why is this? Everyone wants to know!

Overseas, it has already been sold in 16 megabit format. Import shops are already selling this version. Creating a 24 megabit version for Japan takes time, and during this time the foreign copy was being sold in shops. They seem to have decided to release it early as 16 megabit.

Answer. A rise in the size of the software corresponds to a rise in the price. The 5800 yen sales price is pretty cheap for 16 megabit, don't you think? Lower prices are very welcomed by the users. But, I'd like to see both a 16 megabit and a 24 megabit version released... Wouldn't that be luxurious!?