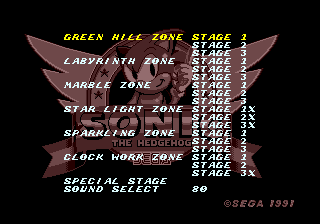 on the title screen. 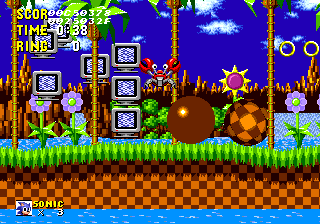 Enabled by default. Highlight a Zone in the level select and press and hold

Many of the sound effects listed here are unique to this prototype and would be replaced by other sounds in the final. 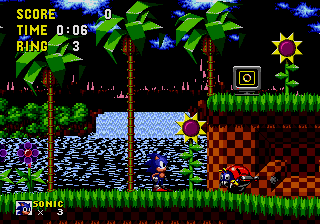 There is an alternate palette intended for Green Hill Zone that exists in the ROM, but is not normally used. By changing ROM address 0x1AF6 to 1D 9C and 0x1AFE to 1D BC, or by using Game Genie codes XTPA-B4H0 and 1TPA-B4H8, this palette can be accessed. This palette is almost identical to the one used for the high score screen in the Mega Play version[9]. 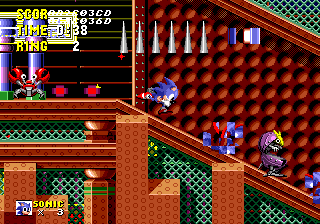 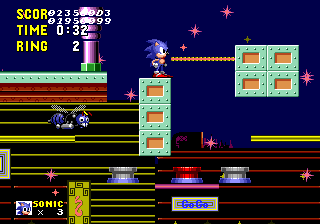 An unreferenced object position list that seems to have been for an earlier layout of Sparkling Zone Act 1 can be found at ROM address 0x729CA. To access it, change ROM address 0x70040 to 29 CA.[10]

When loaded in-game, this layout has numerous differences, such as a large abundance of Badniks including Moto Bugs, and a button that flashes red (which would go unused in the final game). Interestingly, some of the object positions seem to match up with prerelease screenshots from earlier builds.