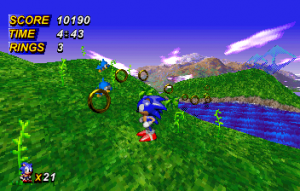 Knowing time was not on their side, Wallis turned to then-new CEO of Sega of America Bernie Stolar, asking him for the technology being used for NiGHTS into Dreams, the Sonic X-Treme team in desperate need of the development tools within. In a few days, a level editor arrived, and for the next two weeks the team became familiar with it[2]. However, development using this editor was forced to cease, with Willis claiming that Yuji Naka was against the technology being used and was threatening to quit were it given to the X-treme developers, Sega bending to Naka's wishes and forcing the team to start back at square one[2].

This version of events is disputed by Naka[3]. While the developers may have had access to level editors, Naka does not recall any requests for the NiGHTS game engine[4], and suggests the two project would be incompatible anyway, due to NiGHTS being built with assembly language and X-treme using C. Naka also suggests that the code powering NiGHTS was designed solely for NiGHTS (it being common at Sega for code to be written specifically for one game), and would be difficult to adapt for other projects. He also suggests documentation was poor, so the code would be very difficult to understand, to the point where he even discouraged Makoto Uchida from trying to port the game when the PlayStation 2 version was in development[5].