Back to: Sonic Riders: Zero Gravity.

The following are instruction manuals for the Wii and PlayStation 2 game Sonic Riders: Zero Gravity. 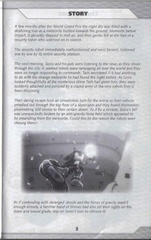 A few months after the World Grand Prix the night sky was filled with a deafening roar as a meteorite hurtled towards the ground. Moments before impact, it abruptly stopped in mid-air, and then gently fell at the feet of a security robot who watched on in silence.

The security robot immediately malfunctioned and went berserk, followed one by one by its entire security platoon.

The next morning, Sonic and his pals were listening to the news as they drove through the city. It seemed robots were rampaging all over the world and they were no longer responding to commands. Tails wondered if it had anything to do with the strange meteorite he had found the night before. As Sonic looked thoughtfully at the mysterious stone Tails had given to him, they were suddenly attacked and pursued by a crazed army of the very robots they'd been discussing.

Their daring escape took an unwelcome turn for the worse as their vehicle smashed out through the top floor of a skyscraper and they found themselves plummeting 300 stories to their certain doom. As if by miracle, Sonic's fall was unexpectedly broken by an anti-gravity force field which appeared to be emanating from the meteorite. Could this be the reason the robots were chasing them?

As if contending with deranged 'droids and the forces of gravity wasn't enough already, a familiar band of thieves had also set their sights on the stone and would gladly step on Sonic's toes to retrieve it!