Template:TVCharacterBobPrincess Sally (or Sally Acorn) is a Sonic character best known for her role in the 1993-1995 Sonic the Hedgehog cartoon series and the comic series of the same name.

Sally is a female ground squirrel/chipmunk hybrid originally based off of the small squirrel sprite in the early Sega Mega Drive games, known as "Ricky" in the Japanese Sonic 1 manual. She has seen many different incarnations and variations throughout the years.

The name "Sally Acorn" comes from the American Sonic Bible, produced internally by Sega of America during the development of Sonic 1. She first appears (albeit, unnamed) as a small squirrel with a pink bow in a 1991 origins comic distributed by Sega of America. Sally is mentioned by name in the 1993 UK publication, "Stay Sonic," and also appears as a minor character in the Fleetway comic series. Most U.S. Sonic publications of the time also feature Sally as a supporting character. She has a minor appearance as a captured Freedom Fighter in the bonus stages of the Sonic Spinball video game developed by STI, and, according to an early development script and statements from Chris Senn and Peter Morawiec, would have been featured prominently in Sonic-16 and Sonic Mars. The name "Princess Sally" is also erroneously given to Amy Rose in the North American version of the Sonic CD instruction manual, presumably for the sake of continuity in the West. She has a brief appearance in the TV special, Sonic's Christmas Blast.

Sonic the Comic's Sally Acorn has the same design as the 1991 Sega of America promotional comic, essentially identical to Ricky except for the bow in her hair. She's a minor character in the series, only appearing in the earlier issues. This version of Sally has a younger brother named Tufftee.

In the second American Sonic cartoon, Sally is the leader of the Freedom Fighters. She is the love interest of Sonic the Hedgehog, much to the dismay of the young royal guard, Antoine. She is something of a mother to Tails, Sonic's surrogate younger brother, and a good friend of Bunnie Rabbot. Sally's goal, along with the rest of the Freedom Fighters, is to defeat Doctor Robotnik and free her father, King Acorn. She is voiced by Kath Soucie.

In the American Sonic comics, Sally is currently about 17 years old (according to Ken Penders) and is the Daughter of King Maximillian Acorn and Queen Alicia Acorn. She is also the younger sister of Elias Acorn, sister in law to Elias' wife Meg and aunt of Alexis Acorn, the child of Meg and Elias. Her Family ruled over all Mobians and their respective territories for many generations. Their official dynasty ended shortly after the Great War, to which the treacherous Warlord Dr. Julian Ivo Kintobor (an overlander defector) staged a coup d'etat, usurping the Acorn throne. Rechristened Ivo Robotnik, the newly proclaimed dictator turned the capital of the Mobian territories into an industrial hell and used the horrific roboticization process to transfigure 85% of the city's population into his mindless robot slaves. Dominion over Mobian territory soon turned to the domination of the entire planet, with him as its supreme overlord. A young Sally, of only five years, was hidden from Robotnik's grasp and sent to live in the protected village of Knothole within the bowels of the Great Forest. Sally grew up to lead a band of ragtag rebel militiamen from Knothole starting at age 10, living with her friends, her governess Rosie, and her mentor Julayla. Early on in the fight, princess Sally would lose her mentor Julayla, but through the long period of fighting lying ahead of her, Sally would rely on her deceased mentor for strength to lead the Freedom Fighters. The goal of the "Freedom Fighters" would be to oust their oppressive ruler. In relatively close proximity to Robotropolis (capital of Mobius), they carried out numerous guerrilla attacks against Robotnik, constantly striving for his overthrow. The Knothole Freedom Fighters soon discovered that they were not the only ones to start an insurrection... and united their cause around the globe. Finding the former Princess a definite threat to his reign, Robotnik devised an elaborate assassination plot, nearly taking the now 15 year old rebel leader's life. Victory seemed to be in the dictator's grasp when he discovered the location of Knothole, to which he built a massive superweapon in order to wipe it off the face of his world. His "Endgame" scheme was foiled by the rebellion and Robotnik ended up MIA during the weapon's destruction, presumed killed by its backfiring. During the years to follow, Sally worked hard to reestablish her Father's government... encountering a myriad of hardships, including the arrival of an alternate reality Robotnik (Robo-Robotnik), who retook Mobotropolis. Robo-Robotnik was destroyed in battle, but through the digital transfer of his conscious into a new robotic body, he was able to live on as "Dr. Eggman". Now she presides over the newly established Kingdom of Knothole, once a haven from the destructive powers of Eggman until he too, like his mighty predecessor, learned of the location. She has a compact super computer with her called Nicole, which can speak and perform other tasks and helps with research, this nifty computer being sent from an alternative future where Sally is queen, feeling that apparently this reality's Sally would seriously need a friend. Sally is also among the few individuals who can wield the Sword of Acorns, other characters who have been able to use it include: Sonic the Hedgehog, Mammoth Mogul and King Max Acorn.

Sally's love is her people. They are whom she sacrifices herself for and would put them before anything else. Males are secondary and are a source of a co dependent relationship: As in, in return for her affections and attention (if in fact that will not prove a bad move for her people), a male provides means of support and aid to her. Sonic has of course been the greatest means of support emotionally and to simply get her out of a pinch so he is therefore the one Sally gives most of her attentions and affections to.

Sonic however hasn't been her only suitor, In instances involving the comic she has at points of its history been a bit of flirt or lover to males such as Geoffrey St. John, (who is now romantically involved with Hershey the Cat), and Knuckles the Echidna Sally's childhood friend (who has now fallen for Julie-Su echidna). Geoffery's being the more serious case of the two, as in the beginning Sally had felt she was in love with Geoffery, in the end only to find out she did not and found herself leading Geoffery on. In recent issues though some would say she's gotten "a taste of her own medicine", as Mina Mongoose is a rival for Sonic's heart.

In issue #99, Mina kisses Sonic, and while he had a little pleasure in the kiss, Mina would walk away unsatisfied in the end because she knew he was more shocked by her actions than he was pleased. Sally watches, misinterprets the situation as something that sealed a girlfriend/boyfriend commitment between Sonic and Mina, gets upset, and runs off, nearly destroying her 10-year friendship with Sonic. Issue 109 when Sally learns the kiss was a "thank you" kiss, not a symbol of Mina and Sonic becoming more than friends or "dating" as she called it, and in the very next issue, she acts kinder and seems more loving to Sonic. Some say that she is only nice to him if she knows she will have him, which is a debated subject even today. In the end, in Archie comics, her love life with Sonic takes a halt when the king and queen leave the throne to see the world for awhile and put Sally in charge. Sally wants Sonic by her side governing. But Sonic understanding he makes a difference in the world through direct actions, does not share her desire. So after arguing with Sonic, she slaps him and runs away crying. The future remains unknown for these two, but her true love-- for the people has remained the same.

Other members of her circle of friends include Miles "Tails" Prower, Knuckles the Echidna, Bunnie Rabbot, Amy Rose, Antoine D'Coolette, Hershey the Cat, Lupe the Wolf, and Geoffrey St. John.

Sally once commanded a ragtag militia called the "Knothole Freedom Fighters" to take on the dictator Ivo Robotnik. However it is revealed as of Sonic 132, Sally is now a royal princess of a now established kingdom and is no longer leading the former rebels behind enemy lines because the kingdom cannot risk their only heir to the throne. According to Karl Bollers, the main writer of the Archie Sonic comic book, there IS no more "Freedom Fighters" as the status quo has changed from a group of "ragtag" rebels to soldiers fighting against Doctor Eggman's terrorism. The soldiers now listen to Sonic more so, even if Sally outranks him; and now that her parents have been reunited, Sally is no longer Knothole's voice of authority.

A saga known as the "Endgame" (issues #47-50) was written, intended to remove Princess Sally from the comic with dignity so that she did not truly lose any of her fans. In issue #47, which was written by Ken Penders, Sally was killed, since the king's arrival would displace her power, making her unnecessary. However, Archie editor Justin Gabrie ordered her to be revived, due to current promotional issues, and so she was in issue #50. (This interfered with the schedule and caused many pages to be cut for issue #50; later it was revised and reissued as a Sonic Super Special.) Her role in the story (and the popularity of the character) waned slowly after her revival.

Sally is her old "pink Sally" self in Sonic's Christmas Blast except she has black hair instead of Brown, and has no spoken lines. Sonic gives her Christmas presents at the end of the special. Pink Sally is an interesting version of the princess seeing that there are three versions, Pink, red and brown Sally, these discolorations are explained by Archie as something in response to immersing with chemicals in a vat while on a mission.

Throughout the American medias, numerous doppelgängers of Sally Acorn have appeared, namely created as robots by Dr. Robotnik for infiltration purposes. 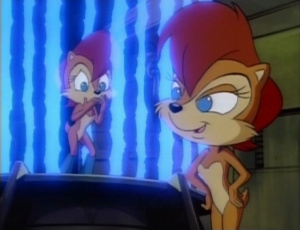 The Sonic and Sally Robo-Sally, with the real Sally locked behind bars.

In the cartoon episode Sonic and Sally, Dr. Robotnik created a machine to duplicate Sally's complete physiology and most of her thought-patterns to infiltrate and locate Knothole Village. Along with being able to look exactly like Sally Acorn, it was equipped with a Mega Muck dispenser and an arm laser pistol. Although the clone was able to duplicate the complexity of a Mobian's mind, it didn't have all of Sally's memories, thus raising suspicion with Tails. When, on a mission in Robotropolis, the Robo-Sally didn't know Sonic and Sally's secret handshake, it was then that Robo-Sally's deception was revealed. Although Robo-Sally was able to stop Sonic for a short period of time, Bunnie Rabbot stepped in and helped. Then, using his speed, Sonic ran circles around the Robo-Sally, eventually immobilizing her from the confusion. The disabled Robo-Sally was used by Sonic to replace Sally, who was in a roboticizer, to save her. Robo-Sally made a brief appearance in Sonic's Nightmare, in both of Sonic's dreams, this time being the real Sally.