Planet Wisp is the fourth Area in the Nintendo DS version of Sonic Colours. As with every other Area in the game, Planet Wisp features two full Acts, three missions and a boss fight. It becomes available to play alongside Aquarium Park after clearing both Sweet Mountain and Starlight Carnival, and either can be completed first.

This Area introduces the Yellow Wisp, allowing Sonic to use Yellow Drill.

After Sonic and Tails beat the effects of the mind-control cannon at the end of their third level, Dr. Eggman retreats to his control room to test and refine the device. While he tinkers with Orbot and Cubot, Sonic decides to destroy all the tractor beams and free the remianing three worlds from Tropical Resort's chains.

On Planet Wisp, Sonic and Tails runs into more of the aliens, unlocking the Yellow Drill power. While investigating the mission levels, they also find Team Chaotix - while Espio is characteristicly circumspect about their reason for being in the orbital park, and Charmy's more interested in the rides than explaining anything, Vector lets slip that the detectives are here to try and collect a bounty on Dr. Eggman: just following the money as usual. 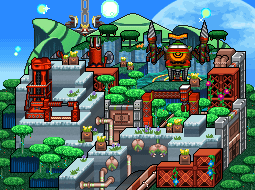 The map screen for Planet Wisp.

The bucolic homeworld of the multicoloured Wisps, this micro-planet has been captured by Dr. Eggman for his Amazing Interstellar Amusement Park, and is currently 'under construction'. This means that the Doctor hasn't quite finished strip-mining or slash-and-burn logging the place, though his giant machines are certainly getting on with it; as such, the level juxtaposes a forested background with cold metal scaffolding on which Sonic actually platforms.

Compared to the Wii version of the Area, there is an emphasis on the subterranean, with Sonic burrowing through soft dirt through use of Yellow Drill Color Power. The soft mounds are still filled with dangers, such as giant plants that will lunge at Sonic to eat him. Should this happen, the player should mash the face buttons to break free.

A short optional tutorial teaches the player how to use the Yellow Drill Color Power.

Planet Wisp Act 1 introduces the Yellow Wisp and also makes use of the Orange Wisp. Underground, flytraps and mines serve as obstacles while Sonic is in drill form. Much like in the Wii version of the game, Sonic can travel through underground pipes that serve as shortcuts. Above ground, bumpers, steam pipes (similar to those of the Mad Gear Zone from Sonic the Hedgehog 4: Episode I), wire trampolines, and the Orange Wisp can be used to reach higher areas.

Planet Wisp Act 2 is similar to Act 1, but uses more bumpers, steam pipes, and trampolines. The end of the Act sees Drill-Sonic chased underground by a titanic mining machine, also reminiscent of the advancing wall of death in Mad Gear Zone.

Collect 200 Rings in 50 seconds. This act takes place almost entirely underground, where the player must maneuver around mines that will cause Sonic to lose all of his rings.

Rescue 8 Wisps. To clear Mission 2, Sonic must collect 8 White Wisps within 20 seconds by destroying Wisp capsules. This Act takes place during the crusher chase sequence from Act 2, which has now been littered with White Wisp capsules.

Collect the Wisps with flags in order. The player must find and collect all of the Wisps in order within 1 minute and 30 seconds. The order is randomized, not unlike the emerald hunting stages in the Sonic Adventure games. A small red arrow on the screen indicates where the next Wisp is located. This mission, like the others, takes place primarily underground.