Nonaggression is the true final/extra Zone of Sonic Advance 3, where the last boss, Ultimate Gemerl (アルティメットジーメル Aruteimetto Jīmeru), is faced. The player needs to earn 7 Chaos Emeralds and beat Altar Emerald with Sonic as the leader to access this Zone. 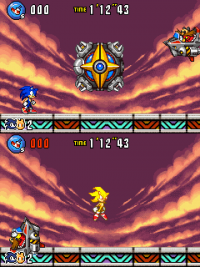 Gemerl (above) & Sonic (below), both transformed after using the Chaos Emeralds

After beating the Altar Emerald boss as Sonic, Dr. Eggman & Gemerl will retreat. Following after them, Gemerl stops for a moment before turning around & tackling the heroic hedgehog; effectively stealing the Chaos Emeralds from him. Gemerl then uses the emeralds to transform into a sort of "Perfect" state, and betrays Eggman by using one of his extending claws to grab his Egg Mobile & slam him into Sonic. Leaving the Emeralds behind, "Ultimate Gemerl" then leaves to cause more havoc elsewhere. Sonic, knowing what must be done, quickly powers up into Super Sonic using the discarded Chaos Emeralds, and flies off to stop the mechanical monster, with Eggman following close behind after a moment of hesitation.

and charging Eggman up to ram into Ultimate Gemerl, opening up a red orb in the front, allowing Sonic to dash forwards and ram it. The longer the player holds

, the longer Ultimate Gemerl's "mouth" will stay open after being attacked for Sonic to hit. The maximum charge is signified by an orange aura.

Ultimate Gemerl's attacks are capable of stunning and disrupting a charging attack, though the former can be avoided by using Super Sonic's dash ability. Ultimate Gemerl's main source of attack are his arms, which can extend across the screen. They are:

All attacks can be avoided by, as said above, using Super Sonic's dash. Ultimate Gemerl is vulnerable at all times as long as the player can nail his "mouth" with Eggman and then dash attack the red orb that appears. After 12 hits, Ultimate Gemerl will be defeated.