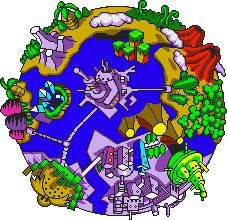 The Little Planet only appears for one month of every year, in the skies above Never Lake. The planet hosts the Time Stones, gems that are coveted by Dr. Eggman due to their mystical ability to control time. Eggman chains the Little Planet to a giant rock (engraved with his own face, no less) and quickly begins work to transform the entire planet into his new base, using time travel to take over the past and thus control the future.

Seeing this, Sonic sets off to foil his nemesis' latest scheme, and eventually sets the Little Planet free by destroying Eggman's base and the rock which the planet was chained to. Released, the Little Planet rises up for a short distance, then completely vanishes. However, if the player gets the bad ending, then the Little Planet is chained back to the rock thanks to Eggman having succeeded in grabbing the Time Stones.

The US instruction manual adds that the Little Planet is normally covered with lush vegetation including tall trees and flowers, but at the start of Sonic CD has been metallised by Dr. Robotnik, and as such is covered only in grim, grey steel.Media:SonicCD MCD US manual.pdf[1]

The Little Planet can be seen in the background throughout the game.

The Little Planet is featured again years later in Sonic the Hedgehog 4: Episode II. In Episode Metal, the Little Planet comes close enough to Sonic's world for Dr. Eggman to revive Metal Sonic and have him travel across space and back to his base in Mad Gear Zone for repairs.

The Little Planet is once again featured in Sonic Mania, and is visited twice by the heroes during the course of the game. The first instance the heroes go to Little Planet is when Dr. Eggman uses the Phantom Ruby at the end of Press Garden Zone to displace the heroes, sending them to Stardust Speedway Zone in the Past. 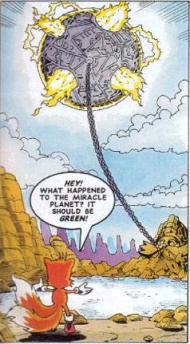 Tails and the Miracle Planet in Issue #27.

In Sonic the Comic, the Little Planet was consistently referred to as the Miracle Planet, save for a single mention in the backup Sonic's World story of Issue #25 ("Prologue: Once Upon a Planet...") that some people know it as the Little Planet. It first appeared in the adaptation of Sonic CD, and then made recurring appearances throughout the series. In this continuity, the Miracle Planet appears in the sky over Mobius for three days out of every month, rather than for one month a year.

In its first appearance, Dr. Robotnik cyber-formed the entire Miracle Planet to be used as a power source for Metallix by somehow transporting a "living" machine to the planet, which then grew to cover the entire planet in grim steel. Unlike its video game counterpart, the cyber-formed Miracle Planet is covered with large fire pits, inspired by the planet Apokolips from DC Comics. Sonic managed to defeat Metallix and restore the planet to normal by using a Time Stone which he stole from the machine in the past.

Some time later, the Miracle Planet was taken over by the Brotherhood of Metallix and was again covered in machinery, this time by capturing Grimer and forcing him to build the Alpha Device which in turn transformed the planet, making it appear like a giant Metallix head, and used as a staging ground for the Metallix's attempts to conquer Mobius. Their plans were thwarted by Sonic and the Chaotix, and the Miracle Planet was subsequently returned to normal yet again.