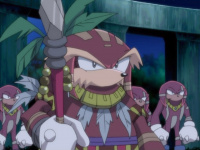 The Knuckles Clan seems to have been a fairly peaceful society until close to the end of its existence; the Sonic Chronicles: The Dark Brotherhood manual states that "...the planet's dominant Echidna race had been blessed with centuries of peace"Media:SonicChronicles DS UK manual.pdf[4]. They built the great stone pyramid cities in Mystic Ruins, close to the shrine of the mysterious Chao and their Master Emerald. At some point, Chieftain Pachacamac inherited the leadership of the tribe from his mother, and while initially a compassionate ruler, the death of his wife turned Pachacamac into a hard-hearted warmonger. The tribe expanded hawkishly, conquering neighbouring nations and fighting a protracted conflict against the Nocturnus Clan, another ancient echidna civilization led by Imperator Ix.