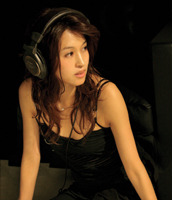 Keiko Utoku (宇徳 敬子), born April 7, 1967 in Izumi, Kagoshima prefecture, is a Japanese singer-songwriter, radio DJ and model. Along with Haruka Murakami and Mami Watanabe, she was part of the idol group known as Mi-Ke from 1991 to 1993 before starting a solo career. She was the vocalist in the European and Japanese versions of Sonic the Hedgehog CD and sung "Sonic - You Can Do Anything" and "Cosmic Eternity - Believe in Yourself" (both called Sonic Theme Song '93 in Sonic Jam). She is represented by Be Rock and her record label is UK Sweet.