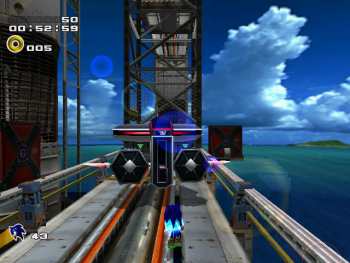 A Gum Hawk in Metal Harbor.

The Gum Hawk (レーザーホーク) is a GUN robot part of the Hawk series, that appears in Metal Harbor's hard mode mission.

It's a Gun Hawk equipped with a stun gun, which fires blue projectiles that bind Sonic into place. It also has additional wings and because of this, it's capable of horizontal movement, along with the default vertical one, therefore the twin engines and the spikes are facing either the ground or forward respectively. It attacks by trying to stun Sonic from a distance while moving vertically to adjust its position like a nromal Gun Hawk. When an attack is successful, it will change its twin engines to horizontal movement and try and ram Sonic with its spikes. It awards 200 points when destroyed.