Revision as of 09:19, 5 February 2019 by McAleeCh (talk | contribs) (Tagged the image as sourced from a screenshot; apologies for missing this out on initial upload!)
(diff) ← Older revision | Latest revision (diff) | Newer revision → (diff) 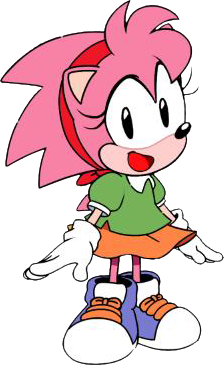 Amy Rose from Sonic Mania Adventures. In lieu of any official model sheets like the other characters, I've taken a screenshot of a suitably neutral frame of the character, isolated it from the background and colour-corrected it to remove the special lighting effect present in that scene, using earlier scenes as reference. This should now at least allow an image of the character to be displayed alongside her name as with the rest of the cast, which can then be updated should official model sheets ever be released.

Click on a date/time to view the file as it appeared at that time.

The following page links to this file:

This file contains additional information, probably added from the digital camera or scanner used to create or digitize it. If the file has been modified from its original state, some details may not fully reflect the modified file.
Retrieved from "https://info.sonicretro.org/index.php?title=File:SMA_AmyRose.png&oldid=271302"
Categories: