Difference between revisions of "Extreme Gear" 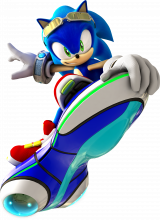 Sonic the Hedgehog on Extreme Gear

Extreme Gear are the modes of transportation used for races in the Sonic Riders series and referenced in some Archie Sonic comic books. Extreme Gear can refer to hover boards, mechanized footwear, bikes, and several other things. In the original Sonic Riders there were several Extreme Gears available. Sonic Riders: Zero Gravity adds the ability to upgrade gears mid-level for ability enhancement. When collecting the upgrades the appearance of the gear changes and parts are added.

There are three types of gear in the game: Boards which are available by default and are the only gear used in story mode. Skates usually have slightly lower performance than boards, but burn less air. Bikes, which resemble floating mopeds, have higher performance but burn more air. Most gear must be purchased from the shop or unlocked in story mode. There are 54 Extreme gear vehicles in total.