The Eggman Fleet in Sonic Heroes. 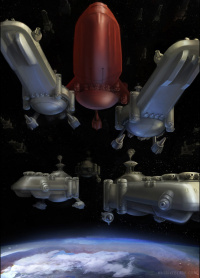 Eggman's armada at the start of Sonic Unleashed.

This article deals with the fleet as a storyline location. For more on the stage in Sonic Heroes, see Egg Fleet.

The Eggman Fleet, or Egg Fleet, is Doctor Ivo Robotnik's aerial armada; a levitating battlefleet bristling with guns, in which the Egg Carrier sometimes serves as flagship. The Fleet was first seen in Sonic Heroes, deployed by Neo Metal Sonic to conquer the world when he usurps control of the Eggman Empire. A smaller, redesigned Eggman Fleet engaged the Black Arms during Shadow the Hedgehog's Sky Troops level.

In Sonic Heroes, the armada first appears to Team Sonic after they defeat the Egg Albatross. It contains hundreds if not thousands of fish-like ships, modelled on sharks, narwahls, stingrays, and a whale shark. Metal Sonic (disguised as Eggman) boasts that their fight in Bullet Station merely served as a distraction to allow the fleet to get underway. Later, the last two levels of the game (Egg Fleet and Final Fortress) are set aboard the ships of the battle group, and the final boss fights against the Egg Emperor and Metal Overlord take place there. Metal Sonic himself devastates a portion of the fleet during the last fight, snatching cruisers out of the sky to hurl at Super Sonic.

The Fleet reappears in a reduced role in Shadow the Hedgehog. Not quite as large or blatantly piscine as in Heroes, here the armada is ordered into action by Eggman when he takes offense at Black Doom's wanton destruction of Westopolis. Clashing with the Glyphic Canyon ruin-ships in the stratosphere, Sky Troops sees Shadow determine the course of the battle himself, either aiding Eggman or the aliens.

Although the fleet has not referred to by name since Shadow's game, Eggman still uses the flagship Egg Carrier for general acts of villainy, and fields a (rapidly destroyed) spaceworthy armada in Sonic Unleashed's opening.