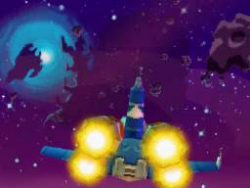 In Sonic Chronicles: The Dark Brotherhood, the Cyclone is an interdimensional spacecraft constructed by Tails and Dr. Eggman during Chapter 6, Black Hole Sun.

After Imperator Ix opens a wormhole to the Twilight Cage using the power of the Master Emerald, Sonic's team realize they will have to pursue the megalomaniacal echidna inside to thwart his plans of global conquest. This means they need a ship: and so Chapter 6 sees Sonic and Shade exploring Metropolis Ground Zero for the necessary components. Eggman and Tails are unplayable during the chapter, remaining instead within the Doctor's weapons lab to assemble the vessel.

The Cyclone serves as the party's base of operations throughout the second part of The Dark Brotherhood, as well as their means of travel from one Twilight Cage planetoid to the next. The vessel is robustly built, surviving a crash-landing on the Kron Colony, an energy-leeching on the N'rrgal Colony, tractor-beam impounding on the Zoah Colony, and a full-scale space battle around the Nocturne. Ironically, the Cyclone is finally shot down by its own creator, when Eggman backstabs the heroes after their escape from the Cage.