The night Act involves a lot of hurried platforming, where you may have to hang onto an icicle that's about to fall, or latch onto a pole to find out it's sinking into the water below. You're also taught to use the flamethrowing robots as weapons, and to melt ice.

After rescuing Professor Pickle from Eggman's prison and restoring the planet fragment of Mazuri, Sonic and Chip are directed to find two new Temples of Gaia; one in Spagonia, and one in Holoska. Their first trip up north sees them recover a Gaia Key from Cool Edge Day Act 1. However, the Temple remains hidden; Sonic has to fly on to Chun-nan to look for more clues.

After restoring the Chun-nan and Spagonia fragments, Sonic can access Cool Edge Night Act 1 in order to get the second Gaia Key for the temple. The boss is the Dark Moray; defeating it allows Chip to restore the cyan Chaos Emerald and fix Holoska's planetary piece. After this, Pickle relocates to his facility in Shamar, opening the desert region and Empire City up to Sonic. 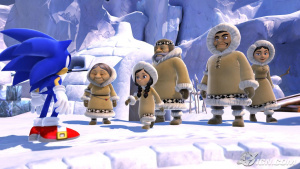 Sonic with the inhabitants of Holoska's settlement.

The daytime Entrance Stage in Holoska is where Sonic can find the Stomping Shoes, enabling him to Stomp down on the comically oversized switches which can open doors.

Jari-Pekka (ヤリ=ペッカ)- Head of the Holoska clan. He has an absolutely terrible memory: first he'll forget something; then he'll forget what he forgot and get upset; give him another minute, and he'll have already forgotten what was troubling him.

Ursule (ウルスレ)- Jari-Pekka's wife, an old lady who just loves to give. If you visit her shop, you might even find yourself walking out with stuff you didn't buy.

Jari-Thure (ヤリ=スーレ)- Sarianna's husband. He looks tough, unless his wife is around; then it's crystal clear who's in charge.

Sarianna (サリアンナ)- Jari-Thure's wife. She was once famed for her beauty (the Holoska Rose, they called her). Sarianna may seem too hard on her husband, but really, she thinks of him all the time.

Marketa (マルケッタ)- Jari-Thure and Sarianna's daughter. When she gets older, Marketa wants to marry a man just like her father: somebody who can take a lot of abuse.

Hot Dog Vendor (ホットドッグ屋)- The manager of the "Don Fachio" hot dog mega-franchise's Holoska location. As the hands down king of hot-blooded dogmeisters, it's hard to tell if his sausages are frozen from the weather or whether it's done on purpose.

The level starts with a long Sonic Boost section, leading into icy half-pipes and spring-heavy 2D sections. There's plenty of opportunity to use the newly-acquired Stomp move. Sonic climbs into bobsleds several times in this level, skating along the half-pipes and even across the backs of surfacing whales!

A three-lap course that sees Sonic running across the icy water surface. Copious use of Sonic Boost is required to keep momentum up and avoid sinking. Watch out for the massive icicles falling from cavern roofs.

The main night act, this level has lots of big fights against hordes of Dark Gaia minions. The werehog has to jump between precarious icicles, and using the Egg Flames to melt open doorways is a required trick.

The third Sonic Unleashed downloadable content is the Holoska Adventure Pack, which adds two new daytime stages, two hard versions of existing daytime stages, and two new nighttime stage. It was released on Xbox Live for 250 MS Points on 9 April, 2009 and on the PlayStation Network for $3.00 on 23 April, 2009.

Day Act 3 is a three-lap drift course similar to Mazuri's Act 2 Day. There is a 1:20 time limit to completing the course.

Day Act 4 is a level launching players from platform to platform, requiring use of the Sonic Boost, light speed dash, and the quirks of Sonic's aerial physics to correct themselves in midair to reach the next platform. After hitting a switch, the player must then play the level slightly altered in reverse to reach the goal.

Night Act 3 is another platforming level, only with much more emphasis on combat. The level uses the new torch object in conjunction with placing those crystal relics from the main game in podiums to open doors and advance to the goal. Ice-slicked floors make maneuvering around difficult.

There is a tutorial mission for Cool Edge that teaches the player how to use the stomp technique, which is required to clear the stage.

Head for the goal!

This main act for Cool Edge day is designed very differently from its HD counterpart. The first half outside is spent entirely on the bobsled, while the rest of the stage takes place on foot inside of an ice cave with tipping ice platforms.

There are five extra missions available for the Cool Edge day act on the PS2 and Wii versions. Several of them are mandatory, while the rest are secret missions found in item capsules.

Act I: The Aurora Snowfields

Act III: The Temple of Ice