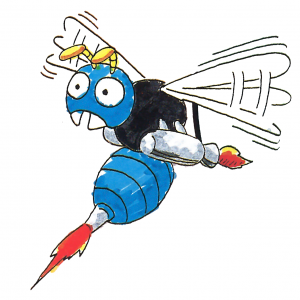 Badniks are enemy robots. It is a term used in the early North American and European localizations of the Sonic the Hedgehog video games.

Certain designs of Badniks reappeared in many of the games, though some appeared only once. One of the most notable designs is the "Buzz Bomber" badnik, which resembles a wasp and fires energy blasts from its stingers—variations of it have appeared in many of the 2D games. "Crabmeat" badniks, which looked like scuttling crabs and fired energy blasts from guns within their claws, and the caterpillar-based "Caterkiller" were also two of the more popular Badniks, and were redesigned several times for several different games.

The "Badnik" term fell out of use after Sonic Adventure was released, and the robots are now only referred to in-game as "Eggman's robots". The only specified robots are now the E-Series and Egg Pawn models.