<forumuser name="Shade" /> Shade first came across the Sonic scene by stumbling upon SWS2B when Pelord was running things in 2001, where he began lurking regularly after the return of Simon Wai around 2003. Shade finally joined SWS2B on November 2nd 2005 after he felt he was up to community par. Shade became a regular at SWS2B, primarily as a researcher, and has made a few noteworthy contributions to the scene.

A dangerously sexy individual, he was at one point considered for registration as a lethal weapon. Shade once saved the entire world by Moonwalking. He is a motherfucker with the intentions of a clock radio.

On January 25th, 2009, Shade was permanently banned from Sonic Retro for repeated spamming and trolling, and sometime in April 2009, he was demoted from his position as an operator of PoundStuff for being gay (though it has since been reinstated). In December 2009, the ban from Retro was removed.

The most prominent of Shade's scene contributions was the re-establishment of Michael Jackson's involvement in Sonic the Hedgehog 3 through various breakthrough observations, such as identifying audio samples found in the Sonic 3 ROM as being taken directly from Michael Jackson songs, as well as identifying Jackson's "Stranger in Moscow" as being near-identical to the Sonic 3 Credits, and other notable musical similarities. It was later confirmed that MJ's various collaborators are credited for the game's music, and again later confirmed by Brad Bauxer that an uncredited Michael Jackson's own input may remain in some of the tracks. In fact, it turned out that Stranger in Moscow was based off of the credits music, which they had composed together. Shade also made some interesting observations having to do with some odd music tracks in Sonic Rush, which later turned out to be the original music tracks from the now unearthed prototype. Shade has also had an encounter with Sonic music composer Jun Senoue (mentioned in detail below) that turned up valuable information regarding the development of Sonic 3. 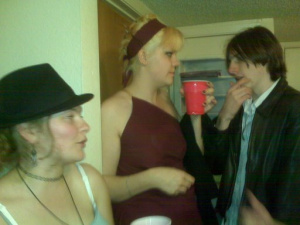 Shade as seen in the act of Bitch-Rocking

Shade has met Sonic music composers Richard Jacques, Spencer Nilsen, and Jun Senoue. On that same day, Shade and Heran Bago showed Jun the infamous Sonic Crackers emulated on Shade's PSP, the result of which was an ecstatic Jun taking a picture with his digital camera. The meeting also revealed some interesting facts about his work and involvement with the Sonic series. Among these, was that Jun was only responsible for the bonus and special stage music in Sonic 3; the rest of his work would feature in the follow-up game, Sonic & Knuckles.

In early 2007, Shade self imposed a ban from the Sonic 2 Beta message boards as a result of his disagreement with the way things were being run, and became active at the now defunct Glowing Bridge community.

However, he has since rejoined S2beta (now Sonic Retro), and remains an active participant of the Sonic Scene. 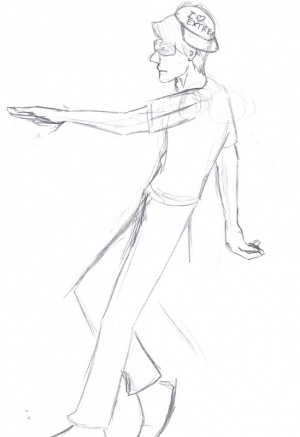 A portrait of Shade saving the world by Moonwalking