Colossal blowhard Quickman's first recorded involvement in the Sonic research community is dated to Wednesday 3rd December 2003; on this date he joined the SWS2B message boards under the name "XinuX", passing the entrance quiz the first time around. His first post was in support of this quiz, claiming it to be "a jolly good idea".

Since then he has managed to accumulate the largest number of posts on the board - causing a degree of forum drama when LOst attempted and succeeded momentarily to exceed his postcount before having it reset due to postcount whoring - containing a strikingly small level of contribution to the side of the community dedicated to hacking or research. Despite this, he has somehow acquired the much-awed Tech Member status, apparently for going to the trouble of learning hex and Motorola 68000 assembly language. 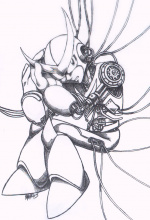 Quickman in a cryotube awaiting repairs.

Immediately prior to his "techification", it was remarked by one Mustapha that he was "worthy of becoming a Tech Member" following the creation of a topic on learning ASM in which Quickman posted an additional link of which the topic author had not thought. Simon agreed, noting that he was "an example of a model member". ICEknight also concurred, observing that it would be nice if "all the newcomers behaved like him". Icy Guy related an incident which had occurred two or three months prior, in which Quickman had intimated that hex was "a nightmare" to him. A little over two years later, Quickman still wonders if these people were (and indeed are) of sound mind and judgement in recommending him for the Tech Member position.

Quickman's other "claim to fame" (besides an obsession with referring to himself in the third person) is being the only Tech Member who has never completed at least one Sonic game which was made before 1994; the only Sonic games he has completed are Sonic R, and Sonic 2 "if you count Easy mode". When he recently purchased a second-hand Mega Drive from the Internet and attempted to play Sonic 2 on it, the inadequate power supply he was using to feed the beast died approximately halfway through Metropolis Zone; he finds this oddly prophetic. Mediums and diviners fully expect his ghost to haunt his final resting place, forever stuck on the very last boss in Death Egg Zone; they say his spirit will not rest until he completes the game.