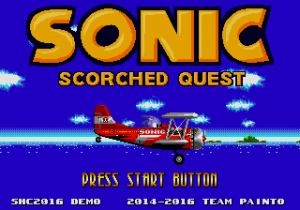 Um, hey? I'm Painto, a Polish Sonic hacker. I'm mostly known for leading the development of award-winning Sonic: Scorched Quest hack as well as other minor projects like Dr. Robotnik's Plan B or Sonic 2D Blast. Currently I'm working with friends on a Scorched Quest remake. Hopefully a finished one this time.

I'm in the hacking thingie since 2014 and I've created few hacks, most notably the mentioned Scorched Quest, but also a less sucessful and advanced Painto Edition series. After SHC2016 I've almost disappeared from the scene for private reasons then in 2019 I announced official retirement. After that, in September 2019 I released my unfinished hacks.

In Q4 2021 me and my friends from Polish Sonic Wiki decided to make a remake of Sonic: Scorched Quest. That's how "Pedia Dev" started, with me as programmer, Hejod as main artist, Mació as level designer and PaperCats as additional member, mostly with ideas and testing.

Besides of Sonic hacking, I'm also an admin of Polish Sonic Wiki and a YouTuber (or at least I'm trying =P).

As my symbol, I use this oval stylised to a flame, coming from Burned Edition's title card. It was made by AsuharaMoon who also provided other graphics for my hacks. Until my 18th birthday I used the original pixelated version. After that important event, I've received a "remastered" version of it from my friend Hejod, who also helps me with other stuff.

After return, as Pedia Dev: