Not to be confused with Metal Knuckles from Sonic R or the scener MK, who can also be found in this wiki. Or a gay bar.

Metal Knuckles is an oddity among the community, alternating between being an asset of common sense and wit to the forums, and being an idiot. Metal Knuckles started out in early 2004 as a member of the Shadowsoft Games forums, than slowly moved his way across the SSRG, Sonic Retro, and briefly in Hacking CulT before he was suspended until 2010. Starting out with a graphical hack of Sonic the Hedgehog named Shadow Alpha, he soon started a trend of creating incomplete hacks for various reasons. Metal Knuckles soon grew a reputation for being one of the few constant presences in the Sonic hacking community without an actual hacking reputation. Metal Knuckles has spread out to the wider ROM hacking community in more recent years, including Romhacking.net, ||board, Board 2, Jul, Aeon Genesis, and SMW Central. 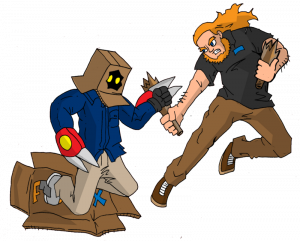 Metal Knuckles fighting against a broken-bottle wielding NiktheGreek, as portrayed by Sonic Warrior TJ
Recent posts point towards his username actually being his real life name, and that he is actually a robot anteater that can shoot missles out of his c***.

Hacks (not discontinued yet) 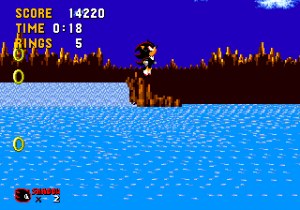 A screenshot of Shadow Alpha, one of the few pieces of evidence that Metal Knuckles has any hacking experience