<forumuser name="Enzo Aquarius" /> Enzo Aquarius is a user on Sonic Retro, having joined in February 2009 after browsing the forum for some time and finally deciding to join. Although he has minimal programming experience, he joined Retro to assist in wiki work and anything else he can help with.

Enzo Aquarius has been a fan of Sonic since he was a kid, but grew up with Nintendo, thus only rarely played Sonic. In early 2008, he got back into Sonic and now is a full-fledged fan. 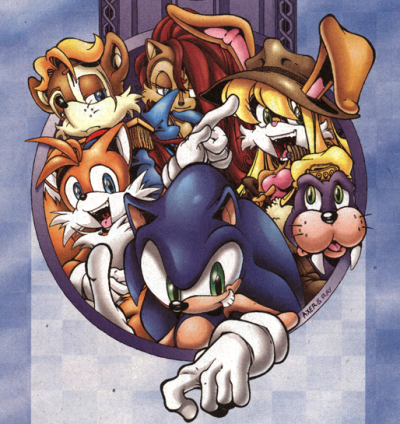 Enzo Aquarius' name is based on two aspects. Enzo is based on the character of the same name (Enzo Matrix) from the CGI television show ReBoot. Aquarius is based off of the zodiac to which he named a Star Trek starship design he created. He has used this alias since 2003.

Enzo Aquarius is currently learning how to mod Sonic 1, and hopefully, will gain enough experience to create a full-fledged project. He attempted to mod a flamethrower into Sonic 1, but encountered difficulties on the way. Progress on this hack is slow, so he has taken up another hack currently called 'Sonic: Cold War Edition'.

Sonic: Cold War Edition was a spur of the moment idea based on a topic of a Russian hack of a Sonic game. A discussion occurred on this hack and Enzo Aquarius decided to create a Cold War-esque hack of Sonic 1. Work on this hack began in July 2009, thus, officially, putting the flamethrower hack on the back-burner.

Work on his hacks, however, are slow. As a beginner to the game modification scene, he has put work on the wiki ahead of his Cold War hack.

This is a list of scripts Enzo Aquarius has created for the various Sonic television series. Sonic X episodes will include a Japanese English Sub version along with the 4Kids dub.