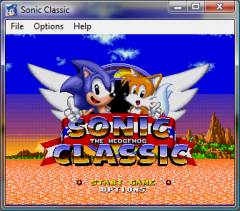 Sonic the Hedgehog Classic is a fan game by Hez. It began as an offshoot of his earlier fan game Sonic 1 PC, with a variety of new levels. The game will allow users to play as three characters—Sonic, Tails, and Knuckles—and possibly a custom character of their own. The game features elements from the classic Mega Drive games, as well as new gimmicks.

The game currently uses the MMF engine for Windows and has had three releases, with the latest revision (see Downloads) fixing some issues reported by players of the previous version. Moreover, it is

currently being converted to a hack for the Mega Drive by StephenUK. Finally, a few months after releasing the game, Hez

announced that he had started working on its sequel Sonic Classic 2, whose features include various new power-ups and level elements and a complete original soundtrack by Karl Brueggemann.

The story takes place essentially right after Sonic & Knuckles. Dr. Robotnik/Eggman's Death Egg has crash landed returning to South Island, and it’s up to our heroes to finally destroy his plans for good. While Robotnik's ship crash landed, so did you. You are now on yet another part of South Island scurrying to find your way back to where the Death Egg landed before Robotnik can get it back up into the sky. During all the commotion, the Chaos Emeralds lost themselves somewhere on the island again. It’s up to you to find the giant rings to obtain entrance to find the emeralds! Therefore, the three begin their Journey of South Island, each taking their own unique abilities with them, taking different paths, each in search of the remaining Chaos Emeralds. Good luck!

While playing Sonic the Hedgehog Classic, you will be able to experience the different gameplay of three characters. They all have unique differences, which make them able to find and take different paths from each other.

We know very little about Sonic's past; he was supposedly born on Christmas Island, he has frequented around South Island, and he and Dr. Eggman have a fierce rivalry. Beyond that, though, his past is a complete mystery. Sonic is something of a nomad; he travels from area to area of the Earth searching for new things to see and do, rarely stopping for anything or anyone unless he's needed, often times getting himself involved in Eggman's schemes to take over the world.

Although he can fly like a helicopter, he also enjoys flying Sonic's red biplane, the Tornado. As the series progressed, it was obvious his interest in the old biplane went farther than just piloting it: Tails is a mechanical genius with intelligence comparable to Dr. Eggman's, and soon after, many modifications to the Tornado, as well as new biplanes, were added to his arsenal. He also operates a small blue submarine called the 'Sea Fox' and a F1 racer called the 'Whirlwind S7'.

Knuckles is a red echidna whose quills look like dreadlocks. According to the Sega Mega Drive games, Knuckles is 15 years old. He debuted in Sonic the Hedgehog 3. However, in the Sonic Adventure games, he and Sonic had their ages switched, making him sixteen. His name came from the fact that two of the knuckles on each of his hands are actually sharp spikes. Knuckles is very strong. Objects like strong walls and large rocks are nothing to his two fists. This is why he's the 'power member' of Team Sonic. He also has the ability to glide by trapping air under his dreadlocks.

There are many different control sets you can choose from:

Essentially the same as any Mega Drive game. The arrow keys are used for direction, and the space bar is jump. Alternatively, you can use the ASD keys to jump, spindash, etc. This option is to emulate the play of a standard 3-button SEGA Mega Drive Controller.

Included in the install is a file that can be used for GlovePie. GlovePie is a program used to interpret the Wii remote once linked to your computer. Using this along a TV screen will give you the ultimate effect.

Gives the player 10 rings. Collect 100 rings for an extra life!

Instead of losing all of your rings, you only lose one blue ring equal to the value of the rings you had.

Gives the player a 1-up!

Gives player bubble shield. This shield makes the character invulnerable for one attack as well as giving him the ability to breathe underwater.

Gives player fire shield. This shield makes the character invulnerable for one attack as well as giving him invincibility against anything dealing with fire.

Gives player electric shield. This shield makes the character invulnerable for one attack as well as giving him invincibility against anything dealing with electricity.

Gives player wind shield. This shield makes the character invulnerable for one attack as well as giving him invincibility against anything dealing with air.

Gives player a basic shield. This shield makes the character invulnerable for one attack.

Watch out! Avoid these monitors. They cause damage to your character!

This monitor freezes time! This could be useful when trying to get through timed events. You can only use it by placing it in debug mode.

These save your current position during a level. If you die after hitting one of these, you'll return to the position of the last checkpoint you hit.

Collect these throughout the game to get the good ending. Obtaining all 7 will also give you the ability to become Super Sonic! 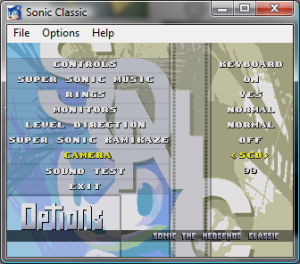 The options screen in Sonic the Hedgehog Classic.

Three modes exist within the game: Normal, which is a normal game; Boss Attack, which which allows you to play through the bosses only; and Reversed, where you play all the Zones in their usual order, except backwards llike you are playing in a mirror! There is also a Time Attack mode, in which you try to beat an Act as fast as you can. In this mode you can also play the Boss Attack and Reversed modes, and you can choose to race against a ghost of your previous best attempt.

All of these modes can be played in Hez's new Sonic Classic Zones, or the classic Sonic the Hedgehog Zones.

These are the final zone that will appear in the Final Game.

Two other Zones will be after these, being the final levels. You'll have to find these!

Some of the latest

The game itself and its background music are available in separate archives, which can be downloaded below. To play the game with music, download both archives and copy the music files into the Music folder within the Sonic Classic directory.