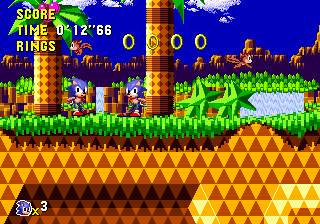 on the second control pad, a second Sonic (rapidly flickering to simulate semi-transparency) will spawn behind the first one, which can be controlled by the second player. This second Sonic controls identically to the first and can interact with the environment in exactly the same way, however the camera does not follow him. Stray too far from the viewport and the second Sonic will warp back to the position of the first.

Any items collected by the second Sonic will be applied to the first. 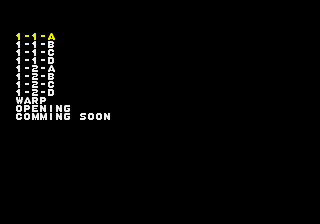 A stage select exists in the 0.02 prototype, but it cannot be acccessed by normal means. By changing byte 0xA1A in track 1 to "01 1A", it can be accessed in an emulator, although all options but 1-1-A lead to the Time Attack screen. 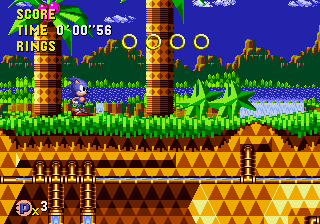 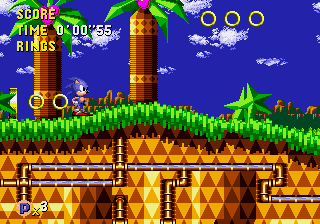 By changing byte 0xA1A in track 1 to "00 70" or "00 58" it is possible to access the Good Future versions of Salad Plain Zone 1 and 2, respectively. Despite the Good Future theme existing on the disc (and being used for the "Comin' Soon" screen), the Past version of the music is played.

There is no legitimate way to create a Good Future during normal gameplay, as neither Special Stages nor Robot transporters have been implemented yet.

Tons of animations for Sonic exist on the disc, but are left unused as only two Zones are playable. Many would be used in the final game, however some are left unused there too.

Some frames of animation are also very slightly different, though in most cases just a handful of pixels separate them from the final game (and are far from obvious).