The following are the instruction manuals of Sonic the Hedgehog 3.

Story from US and EU version manuals

Sonic the Hedgehog 3 takes place on the mysterious Floating Island which holds many special powers. The source of these powers are Chaos Emeralds. In Sonic the Hedgehog 2, Sonic and Tails thought that they had destroyed the Death Egg, which was Dr. Robotnik's heavily armoured ship. Instead, Dr. Robotnik managed to crash land on the Floating Island. After learning that the island is able to float in the sky by harnessing the power of the emeralds, the Doc decides to steal the emeralds so he can repair his Death Egg ship.

To obtain the emeralds, Dr. Robotnik tricks Knuckles, the guardian of the Floating Island's Chaos Emeralds. He also tells Knuckles that Sonic and Tails are the ones trying to steal the emeralds.

Between battling the new types of Badniks and trying to outsmart Knuckles, Sonic and Tails have their work cut out for them once they arrive on the Floating Island and search for Dr. Robotnik.

You'll soon discover that Sonic the Hedgehog 3 is packed with Zones which are three times larger than those found in Sonic the Hedgehog 2. Each Zone is made up of two Acts, and each Act contains dozens of challenges and obstacles for Sonic and Tails to overcome.

Translated by Sega's PC division, done for the release of the Sonic & Knuckles Collection.

In his previous adventure, Sonic destroyed Dr. Eggman's base, the Death Egg; now the debris has started its fall to Earth. And right in the path of the falling base floats a giant cloud-like mass. The giant shadow of Death Egg hides the cloud... Towering mountains, a gigantic forest... the cloud is none other than the legendary floating island, suspended in the sky.

The Death Egg became a fireball and hit the floating island; mountains were destroyed, the forests decimated...

This disastrous event greatly alters the island's path, forcing it towards the Earth.

The island crashes into the sea surface. The impact creates a gigantic wave, but the island doesn't sink.
The floating island now sits on the sea surface as if nothing happened.

On an island far from where the floating island hit the sea surface, Tails, a two-tailed fox, read a strong Chaos Emerald reaction on the Jewel Reader, a machine he has developed.

"Maybe this has something to do with that big wave I saw a few days ago..." he said.

Thinking there may be trouble, he decided to consult with Sonic.

At the same moment, while relaxing on the beach, Sonic found a small ring washed up on shore. Sonic looked at the ring carefully, and noticed some ancient characters carved on it.

The ring reminded Sonic of a legend he once heard about a "mystery island."

In an ancient time, the "mystery island" was part of the main continent. A people with an extraordinary culture inhabited it. That civilization had built a peaceful and happy society using the energy of something they called "The Mighty Stone". But at a certain point, a faction of dark-minded elders tried to steal the energy of the stone, and by accident made that energy explode.

The civilization was wiped out in a second, erased from history. Time passed, and a god descended from the sky to the newly created "mystery island". The sky god restored part of the civilization to the island, and threw the "Mighty Stone" into the open sky...

A ring washed up on the shore - the legend of the "mystery island" - Sonic, feeling his excitement build, made his preparations for another adventure.

Dr. Eggman, who managed to escape from the Death Egg before it fell, had heard that Chaos Emeralds are supposedly buried on the floating island. From the crevice created by the fall of the base, a massive presence of Chaos Emeralds is detected.

"If their energy could be utilized", Dr. Eggman thought, "the Death Egg may be able to fly into orbit again."

Dr. Eggman then quickly built a base on the floating island to harvest the Emeralds. He kidnapped animals and transformed them into robots, and changed the island's environment into a nightmare with his new Environment-Control Machine.

"Yes! Even if Sonic comes to the island, it will be too late! This time the Emeralds are mine!".

The actors and the stage are now ready; here starts Sonic the Hedgehog's newest adventure.

Dr. Eggman's fortress, Death Egg, which was thoroughly destroyed by Sonic in the last adventure, is now beginning to crash to the ground.

Now, closer to the ground, in the path of the falling Death Egg, there was a huge chunk of cloud floating in the air.
And hidden in that cloud was a huge shadow...
A towering mountain range, spread out woods... the shadow was an island. It was a huge "floating island" drifting in the air.

Finally, the floating island collided with the sea surface.
It caused a huge wave that could be called a tsunami, but it did not sink to the bottom of the ocean.
Holding the Death Egg, it remained slightly above the sea, as if nothing had happened.

A few days later... An island far away from the place where the collision between Death Egg and the floating island took place.
Tails, a two-tailed fox, had caught the sudden onset of a powerful Chaos Emerald signal with the Jewel Radar he had invented.
He felt that it might have something to do with the last megatsunami, so he went to the beach where Sonic was.

At that time, Sonic was taking a nap on the beach when he found a small ring washed up along the shore.
The small ring was engraved with what seemed to be ancient characters.
When he picked it up, he remembered an old legend about an "island."

A long time ago, when the island was still part of the continent.
There lived a people with a superior civilization.
That civilization had built a peaceful and prosperous society with the energy of a certain "power stone."
One day, however, a group of elders who wanted to make the energy of the power stone their own accidentally let the energy run wild.
In an instant, civilization was destroyed and disappeared from history.
It is said that after this event, the gods descended from the sky and restored a part of the civilization as an island and released it and the "power stone" into the sky.

The legend of the "island" and the ring that washed ashore...
For some reason, Sonic felt nostalgic and decided to go on another adventure.

In order to obtain the Chaos Emeralds, Dr. Eggman is building a base on the floating island at a rapid pace.
He also kidnapped animals and converted them into robots, and changed the nature of the floating island into a harsher one with his environment changing machine.

"Daaaahahaha! Sonic, you're too late to come to this island! This time, the Chaos Emeralds and this world will belong to me!"

Now, the actors and the stage are ready.
The new adventure of Sonic the Hedgehog is about to begin.

You know him as the world's fastest sonic-speed hedgehog. In this adventure, he plays a major role on the legendary "floating island."

Sonic's sidekick? and an energetic fox with two tails. He flies through the sky and helps Sonic in his adventures.

The evil genius scientist appears again. Will he get the Chaos Emeralds and become the ruler of the world? Or will he be a perpetual loser? 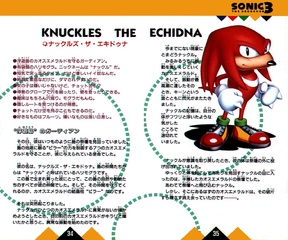 Guardian of the Floating Island

That day, he was patrolling the altar of the island as usual.
It was his mission to protect the seven Chaos Emeralds that control the power of the "pillar" that lies beneath the island.

His name is Knuckles the Echidna. He is a spiny anteater who is called "Knuckle" by his island friends.
He was born and raised on this island, and all of the nature and animals on it were his friends. And the crystal "pillar" of the Chaos Emeralds is the one that protects his friends.

It happened without warning.
As Knuckle was checking one of the Chaos Emeralds to see if there was anything wrong with it, the Chaos Emerald in front of him glittered and began to vibrate abnormally.

Knuckle is puzzled by this unprecedented phenomenon.
The Chaos Emerald began to vibrate more and more intensely.
Just as the vibrations reached their peak, there was a flash of light with a screech.
Knuckle's memory was blacked out when he felt his body float away.

When Knuckle regained consciousness, his body had been thrown outside the altar.
As he slowly woke up and looked around, he saw the half-destroyed altar of the Chaos Emeralds.
Knuckle rushes into the altar.
However, the Chaos Emeralds that were supposed to be there were gone, not even a fragment left behind...

Knuckle walks out of the altar, stunned.
Then, as he gazed helplessly into the distance, he noticed something eerie appearing around the lake.
Knuckle felt a shiver run down his spine when he saw the huge round egg-like object.

"That big egg is the legendary dragon's..."
The egg must be the one that brings misfortune to the island, as depicted in the legend on the altar of the Chaos Emeralds.

Knuckle spent the next few days patrolling the altar of the seven Chaos Emeralds that exist on the island, but all the Chaos Emeralds had disappeared without a trace.
Still looking around the island, Knuckle meets an unfamiliar man in the forest.

"The Chaos Emeralds are being targeted!"
Knuckle is easily fooled by Dr. Eggman's clever lie.
This is how Knuckle's challenge to Sonic began.