Sonic the Hedgehog LCD Wrist Game is an LCD game created by Tiger Electronics. This game is unique among Sonic LCD games as it comes in a form similar to that of a wristwatch.

From June 7 through August 31 1994, a promotional mail-in offer was held in North America and Canada where customers who bought a VHS tape of Adventures of Sonic the Hedgehog, Double Dragon: The Legend Begins or Deadly Mutants would also get Sonic the Hedgehog LCD Wrist Game for a discountMedia:SonicLCDWristGameFreeCard.jpg[1]. 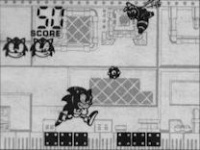 Gameplay screenshot from the manual.

The player controls Sonic the Hedgehog in an action game with four stages, all set on a background themed after Scrap Brain Zone, and the objective is to use Spin Attacks to take out the enemy Badniks and score points. Instead of Rings, the player has four hit points, and three chances (lives) to beat the game. Two separate roll buttons are used for making Sonic perform the Spin Attack forward or backward, as well as a jump button.

Badniks encountered during the game are Ball Hog, Batbrain, Buzz Bomber, Caterkiller, and Orbinaut, with a Robotnik confrontation at the end of each stage. After Robotnik is defeated, a Chaos Emerald is awarded to the player. After all four stages are cleared, the player has won the game.