The following are instruction manuals for Sonic the Hedgehog on the Sega Game Gear and Master System. 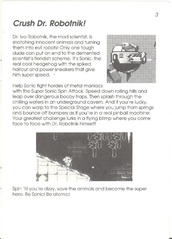 Help Sonic fight hordes of metal maniacs with the Super Sonic Spin Attack. Speed down rolling hills and leap over dangerous booby traps. Then splash through the chilling waters in an underground cavern. And if you're lucky, you can warp to the Special Stage where you jump from springs and bounce off bumpers as if you're in a real pinball machine! Your greatest challenge lurks in a flying blimp where you come face to face with Dr. Robotnik himself!

Spin 'til you're dizzy, save the animals and become the super hero. Be Sonic! Be Atomic! 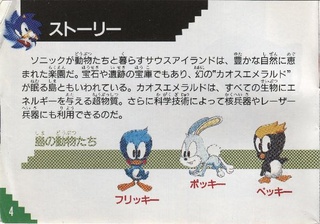 South Island, where Sonic lives with the animals, is a paradise blessed with abundant nature. It is also a treasure trove of jewels and ruins, and is said to be the island where the mystical Chaos Emeralds lay dormant. The Chaos Emeralds are a super-material that gives energy to all living things. They can also be used to create nuclear weapons and laser weapons through science and technology.

One day, Doctor Eggman, who is after the Chaos Emeralds, lands on the island. He locks all the animals on the island in capsules and sends robots to do his bidding.
"Now, the entire island is your enemy. The whole world will be mine."
This is terrible! Go, Sonic the Hedgehog! Everyone is waiting for your help.