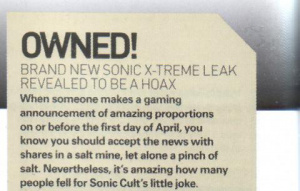 The Sonic X-Treme April 1 Hoax, as mentioned in Retro Gamer.

On March 30, 2006, Sazpaimon posted several previously unseen footage of Sonic X-treme to Sonic CulT's front page, claiming that drx had traded a $500 Gradius prototype in exchange for an X-treme prototype. Later that day, a torrent appeared on tracking site The Pirate Bay and coverage of the prototype's leak was quickly spread around the Internet, reaching several mainstream gaming and tech sites. After seeding various chunks throughout the two days, the torrent finally made its way to other computers, where upon opening it was revealed to be random garbage. The new photos and footage had actually been supplied by X-treme developer Chris Senn, who had been in on the joke. Reaction to the prank was mixed--most members of the community took it in stride or found it to be humourous. ASSEMBLERgames, however, threatened to sue drx, the CulT and Chris Senn for the prank.

The hoax was mentioned in the May 2006 issue of Retro Gamer magazine.