Back to: Sonic X-treme. 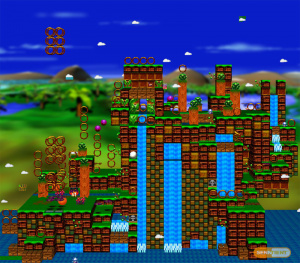 The layout to the first level in Sonic X-treme, Jade Gully.

Because of internal disputes between Michael Kosaka and Dean Lester, Kosaka left Sega in 1995, leaving the still-young Sonic Mars without a lead designer. Chris Senn, who had never been in a leadership position before in such an ambitious project, was thrust into the job. Though given the impression it was only a temporary position until another, more experienced designer could be found, he held the position through most of the development of the game. It was around this time that the Saturday morning cartoon elements were dropped from the game, and the decision to switch platforms to the next generation Sega system was brought up.

Due to the confusion behind what the true successor to the Mega Drive was to be, an effort was made to focus the development on the proposed cartridge-based nVidia-powered system being developed by Sega of America. Though the system promised to be even more capable at 3D rendering than Sega of Japan's "Project Saturn", a failed demonstration of the nVidia chip caused Sega of America's project to be turned down, and development shifted once again to a new console.

With the project fully underway, development for Sonic X-treme was split into two separate groups. The first, led by Chris Senn and programmer Ofer Alon, focused on the main body of the game, creating the worlds that Sonic would run through. The second group, led by programmer Christina Coffin, was tasked with creating the boss encounters, with a completely separate engine started in the 32X-era of the project.

Both teams were watched over by Mike Wallis, who also become responsible for the smaller groups forming in each team, focusing on different aspects of development. Even though these divisions were meant to make development easier, in practice the entire process was a mixture of inconsistency and confusion. With certain people working on levels that hadn't been approved, others waiting until the programming was done, and lack of communication across the board, it was clear that this would not be an easy undertaking. 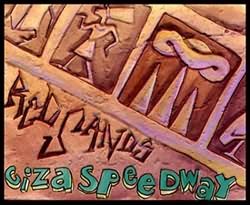 Concept art for one of the title cards to Red Sands.

Originally developed on the Macintosh platform, Ofer Alon's engine was quickly ported over to the PC, with the intent being to port the code to the Sega Saturn. While the levels played smoothly on the PC, Ofer's early attempts at porting the code to the Saturn were anything but, a framerate of only three or four being the maximum. This, coupled with the numerous delays and internal arguments at SOA, prompted the executives to intervene.

At a meeting with Alon and Senn, technical director at STI, Robert Morgan informed the duo that they were bringing in a third party, a company called Point Of View (POV), to take over programming duties for the game. Showing the two a very basic display of Sonic on a checkerboard surface, Senn could not help but scoff at them. Though POV's stated purpose was to port Alon's work to the Saturn, it was made clear that yet another layer had been added to the X-treme development saga, Ofer Alon essentially being demoted. While Ofer took it in stride, Chris Senn was livid, unable to believe that Sega would want to essentially start from scratch.

Regardless, work on the engine continued, with Ofer Alon secluding himself to focus. POV, meanwhile, began its attempt to port an older version of the engine, finding it just as difficult as Ofer did when he tried, if not more so. Making matters worse, in March of 1996, a group of representatives from Sega of Japan (including then-president Hayao Nakayama) visited the American branch, expecting a presentation of the work done so far to Sonic X-treme. Instead, effectively two presentations emerged - one demonstrating Chris and Ofer's PC engine, and another by POV.

Viewing the broken efforts of POV, Nakayama was furious at the state of the project, oblivious to the fact that it was not reflective of the work being done by Ofer. Pointing to the engine being the boss battles, he ordered STI to make the rest of the game like that. By the time Chris Senn arrived, the Japanese executives were already tense, and though he had a brief moment to mention that another, further along presentation was on its way, nerves got the better of him[1]. Due to the poor reception of STI's first showing, Nakayama and the rest had already left the building when Ofer Alon arrived[1].

In the aftermath of the meeting, STI was left with little choice but to follow Nakayama's demands, dropping both Ofer Alon's and POV's work. Making Christina Coffin lead programmer, Sonic X-treme became "Project Condor", but as STI focused its resources to this new iteration of the game, the "old" one continued, with Ofer Alon and Chris Senn now on their own.

Even though they had been removed from the project, Chris Senn (who was also suffering severe medical issues as a result of Sonic X-treme) and Ofer Alon continued to work on the engine and the textures used for the levels. Creating another presentation, the two showed off their work to the PC division of Sega with the hope that the game would be released on PC, where it always worked at the proper framerate.

The management declined to take it on, citing it was not in their budget to finance a new game, preferring to stick with ports of existing Sega titles[1]. While Chris Senn believed the real reasons were just more internal politics at Sega because of Nakayama's distaste for the shoddy port of Ofer's work[1], the end result was still the same. Ceasing work on Sonic X-treme, Ofer left the company, thus putting an end to the Sonic X-treme development saga.

Assets from the game's development would, however see an official release in Sonic's Schoolhouse. As both were being developped concurrently, it was decided to repurpose artist Ross Harris' existing Sonic the Hedgehog model for prerenders of Schoolhouse's titular character. Fittingly, Ross Harris is credited in the game’s Special Thanks.

Over the course of Sonic X-treme's development cycle, a slew of concept art and other various images were created as the team behind the game brainstormed how best to go about producing Sonic's first appearance on the Sega Saturn. Some of these ideas never went beyond the drawing board, while others evolved into various forms of playable content until X-treme's cancellation.

During the early development of X-treme, part of the team's ambitious ideas was to feature numerous playable characters, each with their own individual play style. Chris Senn, the game's lead designer, wanted Sonic to be controlled in an isometric view's similar to what would eventually be seen in Sonic 3D: Flickies' Island, but was convinced otherwise by lead programmer Ofer Alon.

Though not demonstrated in the below concept art, Miles "Tails" Prower's gameplay was envisioned to be that found in most modern 3D games, with a third-person, camera-behind-you perspective. When the game was focused onto just Sonic, the titular character inherited this format of perspective.

To keep things fresh, the player was to control Knuckles the Echidna from a top-down view, the camera showing off the maze surrounding their character.

Tiara Boobowski, commonly mistaken for a hedgehog but actually a Minx Kitten, was meant to be the new character introduced in Sonic X-treme. First conceived as a princess, she later become the daughter of a professor, but each time was meant to be a love interest for Sonic. Though later game outlines made her nothing but plot fodder, she was originally meant to be playable, to be controlled in traditional side-scrolling platformer levels.

Included within the "PackageX" leak of 2009, a set of sprites for two characters, "Chaz" and "Gabby," were found within. They were created by Chris Senn for a personal, unrelated side-project using the X-Treme level editor, and were used as test art.

Near the tail-end of development for Sonic X-treme on the Saturn, Sega of America called upon veteran Sonic game designer Hirokazu Yasuhara to lend his expertise in the ever-problematic X-treme development cycle. His concepts continued to be used during the "Project Condor" phase of the project, but none were successfully utilized in a complete game.