The following are instruction manuals for the Sega Saturn and PC game Sonic R.

Sonic and Tails are enjoying a little time off from their adventure. The trip they have planned will be a nice, relaxing vacation. Or so they think...

Tails spots a huge sign alongside the road they are currently traveling on. It is a recruiting advertisement for the World Grand Prix. "Sonic! Sonic! Look, there's going to be a huge race with all the best racers in the world. What a great opportunity for you to show your speed and compete with the other great runners!"

Sonic thinks for a moment. He's the world's fastest runner, but participating in races is not really his interest. Something on the sign, however, catches Sonic's eye. Dr. Robotnik, Sonic's archenemy, is participating in the race. Sonic races off into the distance. "Wait Sonic! Wait for me!" Tails shouts to his friends.

Miles above the sign, a spy satellite focuses on Sonic and Tails. Dr. Robotnik snickers in delight. "Now that you have fallen into my trap Sonic, I will finally have the Chaos Emeralds, and beat you at the same time. With my new hover machine, and these...". Dr. Robotnik looks to his left, and a row of gleaming eyes gaze back at him. "Nothing can go wrong! Hahahahahahaha....." Little does Sonic know that Dr. Robotnik has learned of the location of the Chaos Emeralds.

But Sonic is not the only one who will be racing with Dr. Robotnik. Sonic's rival, Knuckles, has learned that Sonic will be participating in a very important race. Knuckles never turns down a chance to be around Sonic when the action starts.

And Amy will be there too. After secretly overhearing Dr. Robotnik's plans, she also will be racing to find the Chaos Emeralds.

In Sonic R, you get the chance to be one of the four Sonic characters in a four-course 3D race. Race quickly, but remember to look out for items which will help you along your way. And don't forget to find those Chaos Emeralds! 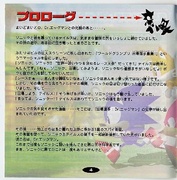 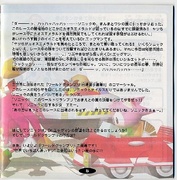 After many struggles with Dr. Eggman...
Sonic and Tails, who adores him, were on a leisurely adventure together.
On their journey, they stopped in a town.

They saw a commercial on the giant screen of a building that said "Recruiting World Grand Prix Contestants!"
"Sonic, Sonic! It's a race to see who's the fastest in the world!" Tails is very interested.
"Come on, Sonic, let's enter the competition. I'm sure you'll win! I want to try my hand at it too!"
"Racing, huh... I'm not really interested in that."
Sonic didn't seem too keen on the idea.
But just as he was about to leave, Sonic's eyes were glued to the switched screen. And then...
"Let's participate, Tails!"
As soon as he told him that, Sonic was already running.
"Wait for me, Sonic!"
Tails rushes after Sonic.

The screen that made Sonic change his mind... it showed the words "Contestant: Dr. Eggman."

At that time... there was a spy satellite floating in the sky, far above the ground.
There was a man who was using that satellite to scout out Sonic and Tails.

His name is Dr. Eggman.
He is an evil genius scientist who has challenged Sonic to battle many times before.
Well, not that he's ever been able to beat him...

"Daahahahaha... Sonic, you've fallen right into my trap. I've already found out that the Chaos Emeralds are lying somewhere in the area where this race is being held! If they happen to find the Chaos Emeralds during the race, it'll save me the trouble of searching for them."
Dr. Eggman is acting cocky as usual.

"When they've collected the Chaos Emeralds, I'll take them all away! No matter how good Sonic is, if I attack when he shows an opening during the race, he won't stand a chance. And this time, I'll be sure to prepare a secret weapon..."
Dr. Eggman turns around, muttering.
From the corner of his eye, he saw several cold silhouettes, their eyes glowing eerily in the dim darkness...

"Heheheh... It was a perfect plan, even for me. Finally, at long last, my long-held dream of world domination shall become a reality! Dahahahaha..."

The World Grand Prix competitor recruitment commercial aired worldwide. Sonic and Tails weren't the only ones who saw the news of this race.
There was Knuckles, Sonic's good rival.
"Sonic! In this World Grand Prix, you and I are going to have a real showdown!"
And then there is Amy, the girl who is in love with Sonic.
"I'm sure that person will be participating in this race... Please wait for me, Mr. Sonic!"

Will Sonic be able to stop Dr. Eggman's ambitions?
And where will the World Grand Prix lead to?

Now it's time for the World Grand Prix!
Who will be crowned the fastest one in the world?!