Back to: Sonic Mega Collection. 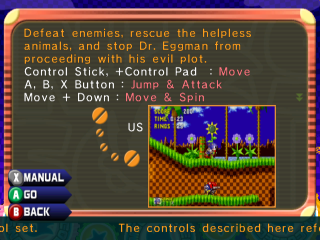 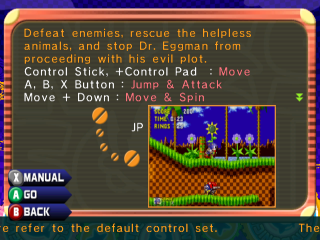 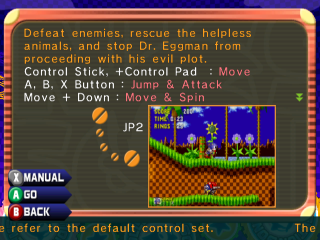 By default, Sonic Mega Collection will load REV01 of Sonic the Hedgehog with the "spike bug" fix, but two other revisions can be accessed by entering button codes when displaying the Sonic 1 info screen:

In PAL versions of Sonic Mega Collection, 60Hz mode must be enabled in order to input the above codes (hold

on startup or, if playing on a Wii, select 60Hz in the Wii settings). Otherwise, it will play the standard US/PAL version.

A Sonic Mega Collection prototype released by drx actually has all of this stuff included, however the movies and the Sonic CD game are nonfunctional.

Three videos exist within the game's data and are all copyrighted to CRI Middleware Co. Ltd., which helped Sega with AV-related things for their GameCube titles. While it is likely Sega was testing the Sofdec player and simply didn't take these files out, the movies and songs take up roughly 20% of the data...and even then, there is still empty space on the disc. This space could have easily been used for more games...or even Sonic CD, which allegedly couldn't be included partly because of "space limitations".

sample.sfd is a test video for CRI's Sofdec video compression technique for developers. If opened by FFPlay or a similar player that can play Sofdec/ADX files, the unused song is played as well (see Music below).

loopbgv.sfd is nothing more than a CG water rippling effect somewhat like the Sonic Team logo animation from Sonic Adventure. It lacks any sort of sound and only lasts 12 seconds. The purpose of this clip, aside from showing off Sofdec's capabilities, is currently unknown;

smpinter.sfd is a 30-second clip of San Francisco. This might be from CRI, since they do have offices in San Francisco, It is suspected to be a test clip from the Dreamcast development kit.