Sonic Dreams Collection is a Windows and macOS PC fan game from indie development group Arcane Kids. Released in August 2015, it presents itself as a collection of four rediscovered prototype Sonic the Hedgehog games for the Sega Dreamcast, and is a surreal perspective on themes of personal identity within the Sonic fanbase.

Each game in Sonic Dreams Collection features a different gameplay style, often encouraging player exploration that pushes beyond the boundaries of the intended play area. Much of the content in Sonic Movie Maker can only be discovered by purposefully exploiting a physics glitch, with players later acquiring the ability to destabilize the programming of the very levels themselves. Another, Eggman Origin, is initially inaccessible due to lack of online fictional servers, and can only be played by opening the game’s file structure and running the hidden program SegaNet.

Make My Sonic is a Sonic the Hedgehog original character creator. Characters can be customized, posed, and photographed before being uploaded to SegaNet. Original characters will appear in Sonic Movie Maker and Eggman Origin, and any pictures taken can be exported to Twitter. 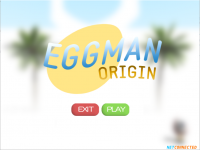 Eggman Origin is a mock MMORPG set in a featureless white limbo populated with talking egg mascots and half-buried earthworms. Original characters uploaded to SegaNet will appear here as heron-like creatures. By feeding enough earthworms to the bean-shaped Dr. Eggman in the center of the map, players can eventually feed themselves to Eggman, and their original character will “ascend” to the Twitter-enabled website Chao Garden. 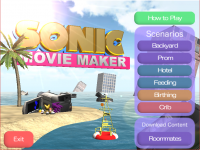 Sonic Movie Maker is a first-person movie maker allowing up to six seconds of video to be recorded using different props, speech bubbles, and scenarios. While initially appearing innocuous, exploration past the boundaries of the stages reveal disturbing leftovers from the fictional developer. Created videos can also be exported to Twitter. 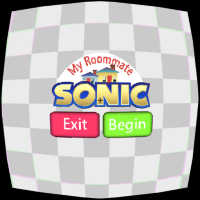 My Roommate Sonic is a virtual reality romance simulation featuring Sonic the Hedgehog and the player, his human roommate. Encouraged by the texting of the roommate’s close friend Dr. Eggman, staring into Sonic’s eyes for long enough results in being absorbed into him entirely. The roommate soon appears again, running through a crude abstraction of Green Hill Zone dressed as Sonic the Hedgehog, concluding with the message “i hope this is what you wanted”. Both Oculus and Vive headsets are supported, as is an option for non-VR play.

Composed by Arcane Kids co-founder Ben "torahhorse" Esposito, the game’s soundtrack was officially published to Bandcamp on August 17, 2015.[2] A feverish mixture of classic vgm, frantic nightcore, and sparkling Dreamcast-era sounds, the soundtrack was composed to further emphasize the game’s theme of uncanny nostalgia. Esposito’s sound design incorporates elements associated with vaporware and forgotten programming, such as the rubbery squeaks of turn-of-the-millennium computer applications, and the randomly-pitched tocking of on-screen text from early virtual reality software.[3]

After leaving SegaNet running and out of focus for around 45 minutes, the program will begin playing the song Bossa Preciosa by Rafael Dovalo López[4] until the window is returned to focus. The mute button that appears in the upper-left hand corner of the program fails to actually mute this song, and will move itself to other corners of the window at unknown intervals.

Sonic Dreams Collection was initially prereleased to members of Arcane Kids’ newsletter. The email contained a link to the website HEDGEHOG EXPOSED 2015©, which hosted a download of the game protected with the password ”grandpa”.[5] After X days, the password was removed and the download became publically available.

Despite his significant contributions, Prakash did not receive much credit for his involvement, and upon the day of the game’s release posted an open letter to Arcane Kids accusing them of perpetuating systemic racism among game developers of color.[6] The next day, Arcane Kids issued an apology, acknowledging Prakash’s statements and clarifying that while these issues were caused by miscommunication, the insight would aid in creating more open and communicative development environments in the future.[1] The game was also immediately updated to add a development credit to Prakash on the main menu, and to remove “@arcanekids” from the default Sonic Movie Maker tweet.

Sonic Dreams Collection’s games were developed separately during game development collective Glitch City's "Sonic is My Boyfriend" event for Valentine's Day of 2015. Created by former Electronic Arts employee and indie game creator Arjun Prakash as a surreal "Sonic the Hedgehog-romance-based game jam", it was here that Prakash also created the collection’s central game, Sonic Movie Maker.[7] Afterward, Prakash decided to merge his game with two games created by Arcane Kids members at the same event, Make My Sonic and My Roommate Sonic, to form Sonic Dreams Collection. Development lasted for another three months, progressing through weekly Glitch City sessions with the help of other contributors.

According to designer Ben Esposito, the development team treated the game as a work of art. They conceived and designed it to “celebrate and satirize the modern Sonic fandom, which is known for its peculiarities.”[8] The title references the names of game compilations such as Sonic Mega Collection and Sonic Gems Collection.[9]