The following are instruction manuals for the Sega Game Gear and Master System game Sonic Blast. A mysterious island has surfaced near Sonic's home—an island with a revoltingly familiar shape. The bald dome and walrus shape moustache are a total giveaway: Robotnik has built another floating platform to carry on with his plan to rule the world!

Sonic the Hedgehog and Knuckles the Echidna decide there's only one thing to do: get to the platform, break inside, and do some serious property damage. Unfortunately, that is precisely what that eggheaded villain is counting on. Robotnik has laid a series of traps he thinks are infallible. His plan is all too familiar: get rid of his nemesis Sonic for good, and once that's done, collect the Chaos Emeralds in order to gain the power he needs to take over the world.

Travel with Sonic the Hedgehog or Knuckles the Echidna through a maze of traps, evil robots and fearsome scenery, and prove to Dr. Robotnik that there's no trap made that a determined Sonic or Knuckles can't overcome! 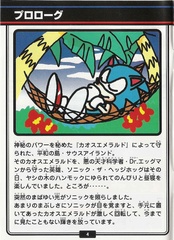 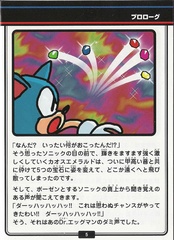 The peaceful island of South Island is protected by the Chaos Emeralds, which contain a mysterious power.
Sonic the Hedgehog, the hero who saved the Chaos Emerald from the evil genius scientist Dr. Eggman, was enjoying a relaxing nap in a hammock of a palm tree that day. But then...
Suddenly, a blinding light illuminated Sonic.
The glare was so bright that Sonic woke up to find that the Chaos Emerald he had been holding was spinning violently, giving off a glow that he had never seen before.

"What the? What the heck is going on?!"
Right in front of Sonic's eyes, the Chaos Emerald, whose brilliance was growing stronger and more intense, finally shattered with a high-pitched sound, transforming itself into five jewels and flying off into the distance.
Then, a familiar voice came from right above the stunned Sonic.
"Daahahahah! What an unexpected opportunity! Daahahahah!"
Indeed, it was the guttural voice of Dr. Eggman.

"You're Eggman! You still haven't learned your lesson?!"
Eggman continued to speak in a hoarse voice, ignoring Sonic's words.
"Daahahahah! Sonic, I was wondering what was going to happen when the beam aimed at you hit the Chaos Emerald, but now I've found something I didn't expect!"
Eggman shouted at Sonic, who was glaring at him.
"Now that the Chaos Emeralds are gone, I, the super genius scientist Dr. Eggman, will build a great fortress on this island! It'll be called Silver Castle!"

"Don't worry, I'll find the Chaos Emeralds after I finish the fortress! Daahahah!"
Eggman is in a good mood, thinking that he has beaten Sonic.
Just then, however, another voice echoed from a nearby shade of tree.
"I can't keep quiet when I hear of the Chaos Emeralds!"
Knuckles, who had heard the commotion, appeared from behind the tree.
Sonic and Knuckles then addressed Dr. Eggman.
"We'll crush your ambitions!"

The hero of South Island. He's the world's fastest sound-speed hedgehog who protects the peace by destroying every evil scheme of Dr. Eggman.
This time, he'll face off against Dr. Eggman for the Chaos Emeralds.

Doctor Eggman and his henchmen

Aiai: A monkey that throws nuts.
Halogen: It flaps about and glows.
Octopus: An octopus that spews smoke.
Gohla: It spins hot balls of fire.
Egg Saucer: A spinning saw. Will hurt if touched.