The following are instruction manuals for Sonic 3D: Flickies' Island.

Sonic and his friends are off to visit the mysterious Flicky Island. According to legend, the island contains precious gems - among them the Chaos Emeralds. Sonic must find the Flickies, mysterious little birds who hold the key to finding the gems. Flickies are rarely seen, and it is said that their existence is tied closely to the location of the Chaos Emeralds.

Meanwhile, Dr. Robotnik has hatched a new scheme. His target this time is Flicky Island. He has detected the presence of the Chaos Emeralds on the island. Upon arriving there, Robotnik immediately starts setting up intruder defenses, and begins building the robots he loves so much. But Robotnik needs to find the Flickies to place inside his machines. Suddenly, in the distance he sees a bright shining Dimension Ring appear. A flock of Flickies fly out of the ring, perch on a tree branch, pick up some food, and then disappear into the Dimension Ring. "So they live in another dimension, do they? Hah! I've found the secret of the Flickies!"

The Flickies travel freely between dimensions using the Dimension Rings! Without wasting any time, Robotnik develops a new device: the Dimension Ring Generator. He captures Flickies from the Flicky dimension using his new device, and begins turning them into robots. Later on, Sonic and his friends arrive at Flicky Island, and find the place in pandemonium.

"Sonic? Again? Well, no matter. With the robots I've created using the Flickies, you'll never be able to stop me! At last I'll be free to find all the Chaos Emeralds and rule the world!" Sonic relizes that he must save the Flickies by freeing them from their robotic prisons and sending them back to the Flicky dimension. More importantly, Robotnik must not be allowed to find the Chaos Emeralds first. Time to go, Sonic! 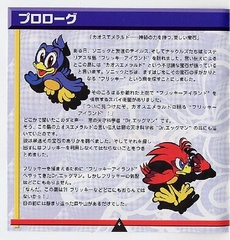 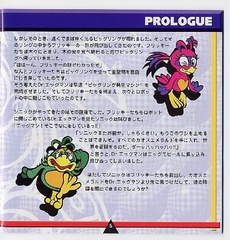 One day, Sonic, his friend Tails, and Knuckles visited the mysterious island of Flicky Island. According to legend, mysterious gems called the Chaos Emeralds lay dormant on this island. The first thing Sonic and his friends decided to do was to look for birds called "Flickies", which were the clue to the gems.

At the same time, there is a spy satellite scouting "Flicky Island" in the sky far away.
"I've finally found Flicky Island, home of the Chaos Emeralds!"
That hoarse voice sounds familiar... it's the evil genius scientist, Dr. Eggman.
Indeed, the legend of the Chaos Emeralds on this island had reached the ears of the evil genius scientist, Dr. Eggman.
He immediately investigated the location of the gems. He discovered that he would have to use Flickies to find them.

Dr. Eggman came to "Flicky Island" to catch Flickies. However, there is no sign of Flickies anywhere.
"What's going on with this island?! There's no Flickies anywhere!"
There was nothing but quiet forests and mountains in front of him.

But then, a big ring appeared in the distance, glowing brightly. A group of Flickies jumped out of the ring. The Flickies perched on the trees, and when they had finished eating the nuts, they returned to the big ring.
"Hahah, I found out the Flickies' secret."
Flickies were using the Big Ring to move freely through subspace.
With such thoughts on Dr. Eggman's mind, he quickly completed the "Big Ring Generating Machine." He captured the Flickies and trapped them one by one inside the robots.

It was right after that that Sonic arrived. When Sonic saw Dr. Eggman locking Flickies in the robots, he screamed.
"Eggman! What are you doing over there?!"
"You again, Sonic. How impudent. You can't stop me now. I'll get all the Chaos Emeralds and conquer the world. Daahahahahah!"
And with that, Dr. Eggman climbed into his Egg Mobile and flew away.

Will Sonic be able to rescue the Flickies, find the Chaos Emeralds before Dr. Eggman does, and stop his schemes?

The world's fastest, sonic-speed hedgehog. Once again, he'll face off against his nemesis (?), Dr. Eggman, for the Chaos Emeralds!

An energetic fox with two tails who adores Sonic. This time, he appears as a helper character.

Sonic's rival, the flying echidna. He's a rival, but this time he appears as a helper character, just like Tails.

The world's most evil super genius scientist. This time, he's going to beat Sonic to a pulp.

Small birds who live on Flicky Island. They are said to be the key to the secret of the Chaos Emeralds, but they are being held by Dr. Eggman.