After a year of not hacking, redhotsonic missed working on Red Hot Sonic 2, and decided to start hacking Sonic 2 again from scratch using ASM. At the time, this hack had a different objective than most others: you must find the emerald in the level before you could finish it. The levels were not of the best quality graphics-wise, though the emerald hunting aspect proved to be a true challenge.

After the second demo release in 2009, the hack sort of went under the radar. On March 28th, 2012, redhotsonic formally announced that the hack was back in the making, citing it as his entry in the 2012 Hacking Contest... this being his first ever entry. In this thread, he showed off some screenshots of some nicer looking zones, this time having their own names and identities, though they were criticized at first for appearing too similar to Advance art, and thus clashing with the Mega Drive Style objects & characters.

It also gave a first look at a brand new boss. He would go on to show video footage of the game, which gave us a listen to the work of ValleyBell's DAC driver imported into the hack, allowing for Sonic CD tracks to play, and underwater effects to be applied to music and sounds.

In early May 2012, it was revealed that StephenUK jumped on board to assist with art, as redhotsonic himself would inform you that he is not a great artist. The result was much nicer looking zones than the initial re-reveal. It would ultimately enter the contest as a partially private entry, and was NOT released publicly.

Fast forward one year, and the hack entered the next Hacking Contest, THIS TIME as a public entry, under the slightly modified title: "Sonic 2 Recreation: Part One".

Sonic 2: Recreation starts off in the Portal Zone which, as those who have played the 2009 release already know, contains portals for 4 different zones. Portals 2, 3 and 4 are blocked until the first zone is completed. After all 4 are completed, all zones are available for free play. To the left, a portal will lead you to the options menu, where you can select your character and utilize the Sound Test. You can also listen to music with the new underwater music effect applied.

The emerald hunting objective in the previous release is no longer present. You may now run through and finish the levels as you desire. In their place are brand new, Sky Chase Zone inspired Special Stages. Obtaining all emeralds will allow the player to exchange their MacGuffins for a ONE TIME ONLY randomly generated cheat code. This code, when used in the Sound Test, will unlock the Level Select.

The hack features Sonic, Tails, Knuckles and redhotsonic as playable characters. Each character can be played as individually, and additionally Tails can pair up with Sonic or Knuckles, acting as a sidekick, and Knuckles can also pair up with Sonic. Cream the Rabbit was originally going to be present in the hack as well, but was soon scrapped due to a bad sprite sheet and people disliking her. Mighty was available in the 2009 release, but is NOT available in the latest release, and it is unknown at this time if/when he will return to the hack. It's also unknown if JetPackTails will be back.

Updates on this hack are posted on the SSRG and Sonic Retro forums. You can find the Sonic Retro topic thread here. [1].

A demo of Sonic 2 Recreation was released on the 19th of April, 2008. Not all planned features were present in this demo, which only features:

Mighty on the OLD Lightning level from the 2009 release. This barrier would block the end-of-act sign and remain until the emerald was found. The warp would take you back to the start of the level, to search the entire level again to find the emerald. This aspect has since been removed.

Level one is completable, level 2 is not: although the emerald is present, the end-of-act sign is inaccessible. In addition, level 2 can also only be played with Knuckles as a main character and Tails as his sidekick.

The second demo was released about a year later. It was more "complete", and had the following:

The third release has undergone a complete overhaul in the past year+. It has the following: 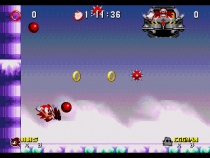 redhotsonic facing the brand new Gem Runway Zone boss. This boss drops red balls that must be spun into to turn yellow. Yellow balls damage the boss. Watch out for spikeballs!

On August 12th 2012, the "Sonic Hacking Contest 2012" revealed the results, and Sonic 2 Recreation took 5 trophies altogether; more than anyone else in that year. Trophies won were:

And then 20 minutes later, it was also revealed that Sonic 2 Recreation won:

Planned features in the future