The aim of this guide is to accurately describe the mechanics of classic Sonic games, while explaining the concepts well enough to allow for different ways to implement the same ideas. All that is described can be implemented in many different ways with the same or very similar results, and nothing needs to be done the exact way the Genesis hardware did.

Before we dive into how the game works, it is first important to know some basic attributes about how the games are structured which will apply to multiple aspects throughout this guide. This is relevant mostly for those looking for extremely close accuracy, and to provide context for some of the game's more subtle behaviour involving collision or motion.

Game engines these days can effortlessly use real decimal values to move objects around and perform precise calculations. In the original Genesis games, they work a bit differently.

Positions and Speeds in the Genesis games are in 2 parts, these being the pixel and the subpixel. The pixel is quite plainly what you would expect, it's what you would see on screen. Think of each pixel as a cell in a grid and this is which cell to look at. The subpixel, however, acts as the fractional part of the position.

Because decimal numbers aren't used, this subpixel actually a positive number up to 256.

Each pixel is effectively split into 256 slices along both axis and this means the finest fidelity available for movement is 1/256th of a pixel (aka 0.00390625). Think of this as where in that grid cell the real position currently is.

All decimal values touted in this guide can be translated into a subpixel amount simply by multiplying them by 256. Sonic's acceleration (acc) for example, is equal to 12 sub pixels. His gravity (grv) is 56 subpixels.

Lastly, this exact same principle is applied to speeds, like an X speed or an acceleration, where they all have a pixel and/or subpixel component. If the value, like acceleration or gravity for example, is less than 1 pixel per frame then it does not need to have a pixel component, of course, and is just the subpixel amount as a single variable.

Decimal values can be used just fine to emulate this in a modern game engine, but keeping this pixel/subpixel mechanic in mind is important for absolute accuracy.

Throughout this guide degree angles are counter-clockwise with 0 facing right (flat floor). 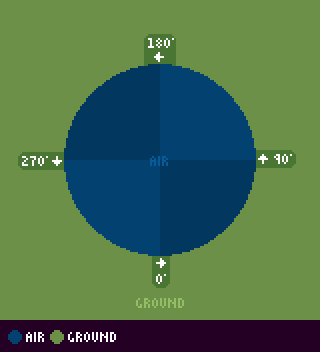 This is exactly how programs such as Game Maker Studio work. However, this isn't how the original games work.

Throughout the guides, angles will be presented in the following format: Approximate Degrees°, (256 Decimal), ($ 256 Hex)

Not only this, the original game's angles are clockwise while the degrees shown are counter-clockwise (in order to be compatible with common game engines), so be aware of this when reading any angle other the Degrees.

Degrees are fine to use, however if you want pinpoint accuracy to the originals, you would need to create and use your own angle system using 256 clockwise angles.

Simply be aware that the degree values presented here are approximate only.

Of course, if for some reason you only have access to the Hex angle, the 256 slices will not help you if you desire using degrees. And the direction is clockwise unlike other languages such as GML, so $20 isn't 45° like it should be - it's 315°. In order to convert the original clockwise hex angles into counter clockwise degree angles you can use in GML, use this calculation:

This reverses the hex angle, then multiplies it to fit within the 360 range.

Objects are the building blocks of each Sonic game (ignoring the Terrain Tiles). Sonic is an object, items are objects, and so on.

The following variables/constants will be referenced frequently in this guide.

Each game object follows the same or similar conventions. They all have X and Y positions, X and Y speeds, a Width Radius, a Height Radius, animation variables, an angle, and more.

For the most part, the width and Height Radius of an object describes it's solid size, so it's the box size if you can push against it or how big it is when touching solid tiles if it can move around. Or both, as the case may be.

Objects use 2 values to define their size for collision. A Width Radius, and a Height Radius. These are centred outward on the object's origin, forming a box around it. In a game with small sprites and pixel art, a pixel difference with worth acknowledging. A size in Sonic games isn't simply 2 times the radius.

A radius of 8 would end up being 17 px wide rather than 16, and the sensors work in much the same way. Making his pushing Width Radius of 10 become a total width of 21, not 20. This applies for all heights as well as all widths. This basically results in every collision mask, box, or sensor arrangement always being an odd number in overall size. This means they also won't perfectly match up with the evenly sized pixel art.

It's a matter of 1 pixel in width and height, but it could make all the difference in accuracy. To avoid confusion, both measurements will be mentioned (otherwise, refer to image examples).

Hitbox sizes are not the same thing as the object's Width Radius and Height Radius, though they do follow the same format. They are defined separately and can differ greatly from the normal object size. For example, a ring's Width/Height Radius would be 8, but for it's hitbox it is 6.

Characters follow the same format as any other object for the most part. But there are some specific character traits that can help you get started.

Sonic's Width Radius is usually 9, and his Height Radius is usually 19. These radiuses determine where Sonic's floor and ceiling tile sensors will be. These can change depending on Sonic's action, and how they behave will be described in Solid Tiles, as they are most relevant to collision specifically. Sonic also has another radius that he uses for pushing against objects and tiles. We will call this his Push Radius which is always 10. This radius is implied via being used for the sensor positions and during object collision rather than actually defined as a variable in-game, though it simply makes more sense here to describe it as a constant.

The main thing to keep in mind with any object/tile collision is that it typically only concerns itself with any object's whole pixel position, totally ignoring any subpixel amount. So when you perform any collision calculations, you can emulate this by just comparing/testing/using a floored position instead of the real position.