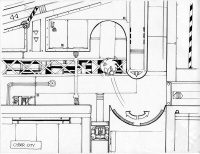 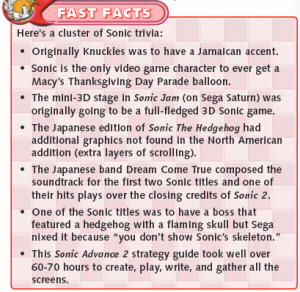 Magazine clip at one point speculated to refer to the Genocide City boss.
Genocide City Zone is a scrapped level from Sonic the Hedgehog 2. It was meant to be a single level which used the map that ultimately became Metropolis Zone Act 3. Concept art of it has been

released revealing the levels name was originally Cyber City. Due to the level being mechanically themed, instead of grim and deadly as the name implied, the theory that a Sonic Advance 2 magazine clip referenced the boss of Genocide City seems unlikely.

It is listed in the level select menu in the Simon Wai prototype but selecting it simply brings the player to a empty level. Chemical Plant Zone music plays, and the player will simply fall to their death at the bottom of the stage. Enabling debug reveals that the only objects in this level are the two default objects, a ring and a teleport monitor.

According to ICEknight, Tom Payne used the theme of the level to create some graphics for an unreleased game called B-Bomb. He then used them in the Sonic Spinball level, The Machine.[1]