According to the level select, Death Egg has two acts. It's possible that Sega originally planned to make Death Egg a two-act ordinary zone, but the second act was cut due to time constraint.

Why are tiles from Aquatic Ruin Zone loaded into the RAM? 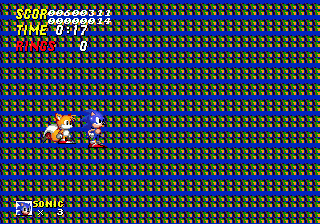 Both acts are empty, and our heroes fall to their deaths.