Sonic is not vertically centered on the right screenshot. It happens when Sonic is traveling very fast. The Sonic in MegaCosm's might not be moving very fast if he paused at the horizontal part of the tube above. So this vertically-off-centered aspect is not that significant.

However, one thing worth noting is that, in MegaCosm's picture, Sonic's shield appears outside the tube. One may argue that the shield is indeed inside the tube, but somehow it "bleed" through the tube because of overexposure or some other photographic error. This is unlikely, seeing that the sides of the tube are trimming off parts of the shield, yet the shield on MegaCosm's looks perfectly circular.

Unless a better explanation is offered, the source of this picture is deemed to be from another playable prototype.

Judging by this single screenshot alone, we cannot conclude whether it's an earlier or later prototype. 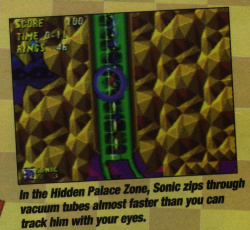 However, in the same issue it came with two other similar screenshots (see M05 and M06), and we can assume the pictures were from the same source. Since pictures M05 and M06 are concluded as later prototype, we can deduce that this picture also came from a newer prototype.