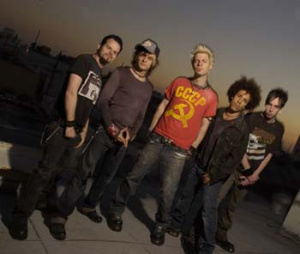 Powerman 5000 is a famous American band. They performed the song "Almost Dead" in Shadow the Hedgehog.

In 1990, Spider dropped out of art school and bought a cheap 4-track home studio and drum machine. Working under the title "MC Spider", he recorded "Much Evil" with producer Lamar Lowder. Building on local success, he built a band under the name Powerman 5000. Their style was in the nature of rap/metal that had yet to gain popularity. In 1991, longtime guitarist Adam 12 (Adam Williams) joined the band. In 1994 and 1995, Powerman released two independent records, True Force and The Blood Splat Rating System. Both albums were local successes.

In 1997, the band signed to Dreamworks Records and released a re-recording of The Blood Splat Rating System (with two new tracks) titled Mega!! Kung Fu Radio. The band toured and released singles such as "Organizized" and "Tokyo Vigilante #1". In 1999, Guitarist M.33 (Mike Tempesta) joined the band as they got their biggest break. Creating a strange fusion of science fiction (which had always interested Spider) and "action rock" (the term for their own high-energy powerful rock), they released Tonight the Stars Revolt!, which contained the hit singles "When Worlds Collide", "Nobody's Real", and "Supernova Goes Pop". The album sold over a million copies and assured the band's success.

A follow-up album titled Anyone For Doomsday? was recorded and a single ("Bombshell") had been released to radio stations, but the album was canceled just before its scheduled release. Due to being heavily downloaded illegally, Anyone For Doomsday? was later released under Spider's own new label, Megatronic Records, but has since gone out of print due to legal issues. Arguments exist as to whether the record was canceled due to the events of the September 11th terrorist attacks and the negative title, but the album was finished and scheduled to be released in August of 2001, a full month before the attacks. Spider has said in interviews that the album was dropped because it sounded too much like the previous album and that he wanted to release something fresh and different instead of repeating himself. Conflicts thereafter caused longtime members Dorian 27 (Dorian Heartsong) and Al3 (Allen Pahanish) to leave the band. Ad7 (Adrian Ost) and Siggy Siursen were brought in to replace them.

In 2003, the band released Transform, a more punk-fueled album, completely dropping the costumes that had been featured throughout the band's Tonight The Stars Revolt! era. Containing the hit singles "Free" and "Action", the album sounded much more live and less filled with industrial metal electronics. After the release of Transform, Dreamworks Records was bought out by Interscope Records, and Powerman 5000 decided not to make the move. Undeterred, Spider continued with his own offshoot label Megatronic Records. In 2005, new music was released, both in the form of a rarities album titled The Good, the Bad, and the Ugly, Vol. 1 and in new music from an upcoming album. Powerman 5000 has also released tracks to games, such as Frequency (with its sequel, Amplitude, and Guitar Hero), MX vs ATV Unleashed, Tony Hawk's Pro Skater 2, SX SuperStar and WWE SmackDown! vs. RAW. Frequency featured "Danger Is Go!", from their Anyone For Doomsday album. MX vs ATV Unleashed featured "Heroes and Villains", THPS featured "When Worlds Collide", SX SuperStar featured "Bombshell" and SMACKDOWN VS RAW featured "Riot Time", "The Last Night on Earth", and "The Way It Is", all of which have close sound to their Transform album. A new tour was also started, but M.33 had left the band and Adam 12, while present on the upcoming album, was not touring. Former Alien Ant Farm guitarist Terry Corso and former Half-Cocked (the first band on Spider's label) guitarist Johnny Rock were brought in to round out the live show. The band has recently completed their new album, c alled Destroy What You Enjoy and due out in Spring of 2006.

Also a note of interest, Powerman 5000 made an appearance at the 5th Annual Gathering of the Juggalos.