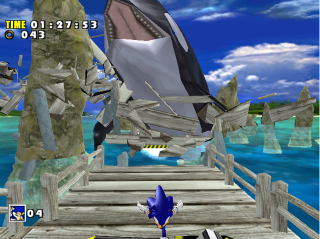 Orcas are aquatic mammals that appear in several 3D games in the series, often serving as a level element or background decoration to add to the liveliness of a setpiece. They are infamous for chasing Sonic the Hedgehog throughout mutliple scenes, usually in tropical environments.

The orca first appears in Sonic Adventure, chasing Sonic in Emerald Coast, destroying the wooden bridge over water. This is the famous "Orca Chase".

In Sonic Heroes, two orcas appear jumping from one place to another in Seaside Hill and Ocean Palace. They serve as background elements only.

An orca appears in Sonic 2006's Wave Ocean, and again chases Sonic across wooden platforms. Sonic hangs onto its dorsal fin and gets flung off when Tails closes the gate to keep the orca inside. This is also a call-back to the "Orca Chase" from Sonic Adventure.

Both the Nintendo 3DS version and console/PC versions feature the orca.

In the Nintendo 3DS version, it appears in its original habitat in Emerald Coast for both Sonics. In Classic Sonic's Act, the orca chases Sonic on a 2D plane through an obstacle course full of crates and holes in the bridge, resulting in death if Sonic drops in. In Modern Sonic's Act, it appears at the end of the Act and is much more aggressive, thrusting Sonic into a Quick-time event in which the player must press

In Sonic Dash, the orca appears as a background element to serve as decoration once again.