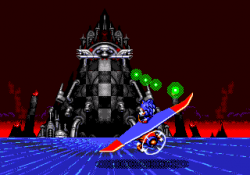 The Veg-O-Fortress, Robotnik's base on Mount Mobius seen in the opening to Sonic Spinball

Mount Mobius is asserted to be the highest summit in Sonic's world; a titanic volcano rising up out of the sea and being generally intimidating to nearby observers. The mountain disapears at the end of Sonic Spinball when it, along with the Veg-O-Fortress sinks beneath the waves.

What Mt. Mobius looked like in its pristine, natural state is never shown, for the mountain makes its first appearence only after the Veg-O-Fortress is built on it by Doctor Robotnik. In the style of evil geniuses everywhere, Robotnik decides that the highest point in the world would provide an excellent site for another of his evil bases; and the locale is all the more attractive due to the fact that Mount Mobius' furious volcanism will provide ample electricity for his deranged schemes.

Thus, by the time Sonic and Tails arrive, the towering spire of rock has been metallised into the Veg-O-Fortress. This industrialised leviathan includes four distinct levels:

After pretty much everything inside the Veg-O-Fortress gets wrecked during the events of Sonic Spinball, Robotnik's facility collapses. The end sequence of the game shows Mt. Mobius and the remnants of the Veg-O-Fortress falling beneath the waves. Consequently, the mountain is destroyed.