Merlina the Wizard is Sonic's principal ally, and later the principal antagonist, in Sonic and the Black Knight for the Wii. An unusually tall member of the long-eared Arthurian folk, Merlina is the Royal Wizard of the Grand Kingdom, and the one who initially summons Sonic to the Arthurian storybook realm. She is the granddaughter of the famous wizard Merlin.

During the game's opening sequence, Merlina is being pursued by King Arthur and the Knights of the Underworld. The Wizard uses a summoning ritual to warp a "brave knight, swift as the wind" into the Arthurian world - and Sonic promptly falls out of the portal, chilli dogs in hand. After the hedgehog dispatches the demon knights, Merlina stops him from attacking King Arthur straight away, and instead conjures a magical cyclone to teleport them away to the shores of Misty Lake.

After Sonic acquires Caliburn, Merlina explains that she cannot accompany them on their journey; as the Royal Wizard, she would attract unwanted attention from the residents of the Kingdom. Merlina instead remains in hiding for much of the first half of the game, while Sonic completes quests for Nimue, Lady of the Lake. When the hedgehog goes to battle King Arthur for the final time on Faraway Avalon, Merlina is finally tracked down by the Knights of the Round Table in Castle Camelot. The Blue Blur arrives back just in time to intervene and deliver Merlina the Scabbard of Excalibur - which then enables the wizard to play her true hand.

Merlina reveals that she had, all this time, been planning a double-cross. Summoning Sonic to the Kingdom was not a scheme to defeat King Arthur and bring peace and liberty to the land; but rather to take the power of Excalibur's Scabbard for herself. Having scryed the future of the storybook realm, Merlina realized that the Grand Kingdom was doomed to end in ruin and warfare - and is determined to prevent this, interpreting her grandfather's dream of a kingdom that lasts forever literally. The wizard intends to apply the Scabbard's power of immortality to the realm itself by placing Grand Kingdom under a kind of magical stasis. As the castle falls apart around them, Sonic and the Knights flee through Knight's Passage. In order to save the Kingdom, the former lieutenants of King Arthur agree to work with Sonic and Nimue to halt the Dark Queen's magic by activating four sacred stones. Sir Lancelot rushes to Shrouded Forest, Sir Gawain to Great Megalith, Sir Percival to The Cauldron, and Sonic to Dragon's Lair.

Nimue's plan is, however, ineffective in halting the spread of Merlina's magic. Sonic and Caliburn head back to the castle to face the wizard in Dark Hollow. After being bisected by the crazed sorceress, Caliburn fuses with the other Sacred Swords of the Knights of the Round Table to become Excalibur - simultaneously encasing Sonic in a suit of gold armour: Excalibur-Sonic. In response, Merlina uses the power of the Scabbard to transform into the giant Dark Queen, the game's final boss.

After her defeat, Merlina returns to normal, but continues to lament the fate of her world. Sonic hands her a flower and comforts her, proclaiming the anarchic wisdom that, while every world has to come to an end, they just have to live life to the fullest until then. Merlina thinks of her grandfather and apparently takes Sonic's words to heart. Though we don't see her reaction, she is also present when Caliburn reveals that Sonic is the one and true King Arthur. 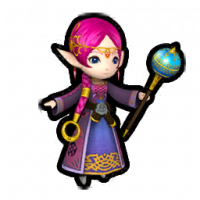 Merlina appeared in Sonic Runners as a S. Rare buddy which activated a random Color Power after a certain number of combos. She also had a role in the "Windy Hill in Spring" event where she came to Sonic's world where she was introduced to Team Sonic by Omochao, though she did not speak. Omochao asked Team Sonic to give her a tour while promising that her powers would be of use to them, to which Team Sonic gladly accepted.

Her Dark Queen form also appeared as a S. Rare buddy obtainable as a prize in Timed Mode.