Mephiles the Dark (pronounced "Meh-fill-iss" and thought to be named after the demon in German folklore, Mephistophiles) is the primary antagonist of Sonic the Hedgehog (2006). Along with Iblis, Mephiles is a component half of Solaris, a hyperdimensional creature revered as the sun god of Soleanna.

Mephiles can deploy a variety of supernatural powers, amongst them changing his form, summoning shadowy clones, and travelling through time; abilities which he employs often in prosecuting a vendetta against Shadow the Hedgehog.

Mephiles' master plan over the course of the game is to secure the release of the Flames of Disaster from Princess Elise the Third, and thereby reconstitute himself as part of the godhead within Solaris. By manipulating the heroes, chiefly Silver the Hedgehog and Blaze the Cat, he is eventually successful in this plan - along the way becoming the only villain to kill Sonic the Hedgehog. However, after the End of the World, Solaris is defeated by the combined efforts of the heroes' super forms. Princess Elise then goes back in time to annul the Solaris Project, which writes Mephiles the Dark out of the timeline by preventing the accident which first created him.

Mephiles also makes a small cameo in Sonic Rivals 2 as a collectible card, which is won by getting an S-Rank in any Knock-Out battle.

In his "natural" state, Mephiles' is a black, oily puddle wreathed in purple smoke. It is in this form which he is split from Iblis, and flees through Aquatic Base.
Later in the game, Mephiles is able to adopt the form of another being by possessing their shadow. Specificly, Shadow the Hedgehog's shadow. When in another form, Mephiles warps it into a crystalline look when he taps into his full power.

He is sealed in the "Scepter of Darkness" by Shadow, who had traveled through time to ten years before the main events of Sonic the Hedgehog. In the present, Dr. Eggman accidentally releases him when he causes Rouge the Bat to drop the Scepter. When he is released, Mephiles uses Shadow's shadow to create a form that is a near exact physical duplicate of Shadow himself, the only differences being is that the stripes are pale blue instead of red, a pale gray muzzle, dull colored rings, and green eyes with vertically slit pupils, much like a reptile. Mephiles then disposes of Shadow and Rouge by sending them into the future before beginning to seek the Chaos Emeralds. At the same time, he makes plans to bring pain and despair to Princess Elise with the goal of making her cry, which would break the seal on Iblis, his other half and release him. With the release of Iblis, Mephiles would then use the power of the Emeralds to fuse them together, and thus complete Solaris. With the knowledge that Elise has grown fond of Sonic the Hedgehog, Mephiles uses his powers of time travel to manipulate Silver into thinking that Sonic was responsible for Iblis being released and destroying his time, causing Silver to hunt down Sonic. Mephiles also tries to get Shadow to join him, telling Shadow the world was going to turn against him after Iblis was released, but failed because Shadow didn't trust him. Afterward, Mephiles attempts to eliminate Shadow using his more powerful crystalline form but fails, and Shadow turns Silver against him. In the end, Mephiles personally kills Sonic in a sneak attack, causing Elise to cry over his death, thus releasing Iblis. Mephiles immediately fuses with him and completes Solaris. However, Mephiles is destroyed along with Solaris during a battle against Shadow, Silver and a revived Sonic in super form. Shortly afterwards, Elise blew out Solaris' flame, erasing both Iblis and Mephiles from time, making it so that none of these events ever happened. He is voiced by Takayuki Sakazume in the Japanese-speaking version of Sonic the Hedgehog, and is voiced by Dan Green in the English-speaking version. 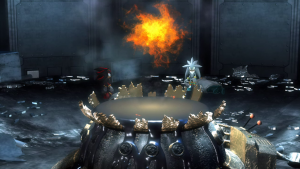 Mephiles and Iblis, just after their scission in the Solaris Project

Mephiles the Dark is unique among a majority of the villains in the Sonic series. Unlike most of them, which are driven by a lust for power and control, Mephiles (as Shadow put it) only seems to crave destruction. He is portrayed as a cold, ruthless villain with no sense of compassion whatsoever. He would do anything to accomplish his goals, even if it means taking innocent lives. Mephiles happens to take great pleasure and delight in hurting others, making him a very sadistic and psychotic individual. For example, he made it his sole mission to cause pain to Elise throughout the entire course of the game, and even broke out into a maniacal laughter after ending Sonic's life. Mephiles also happens to be highly intelligent, as he's capable of using and manipulating people to further his his evil plans. This is shown when he preyed upon Silver's frustration and desire to save the world, by deceiving him into thinking that Sonic was responsible for everything, knowing that killing him would have done the exact opposite of what Silver was trying to achieve. Aside from his failed attempt at convincing Shadow to join him, Mephiles' manipulation tactics often work, which is why he came so close to succeeding with his plot to destroy the world.

Mephiles was added to Sonic Runners as a Speed-type playable character. Like all Speed-type characters, he was capable of performing a triple jump, and playing as him would cut game speed by 5% and provide a 37% bonus score increase.