In Japanese folklore, a kitsune is a type of mononoke derived from the Japanese red fox. They are known to be tricksters, teachers, and skilled with magic. Usually, any fox is believed to become a shapeshifter when it reaches a certain age (often a hundred years), and its powers keep growing with years. Kitsune are often associated with the deity of rice known as Inari. Originally kitsune were the messengers of Inari but now the line between the two has become blurred. Kitsune are connected to both the shinto and Buddhist faiths.

According to legend, kitsune grow additional tails as they age, up to a total of nine. These magical foxes are called kyuubi no kitsune (nine-tailed foxes). It is said that each additional tail represents a thousand years of the kitsune's life. Kitsune spirits are reputed to be gifted with incredible powers, including possession, the ability to breathe fire or create fire by rubbing their tails together, to manifest in dreams, to create elaborate illusions, and even to bend time and space or drive people mad. There are many different types of kitsune, such as "ghost" kitsune, or "heavenly" kitsune, and the names given to them are often female, signifying that the kitsune as a race are feminine. 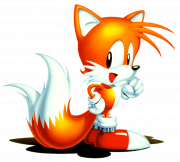 Embedded in popular folklore as they are, kitsune have made appearances in many contemporary Japanese works. The digimon Renamon from the third season of the Digimon anime was inspired by the kitsune, as was Sonic the Hedgehog's two-tailed sidekick Tails. Two Pokémon creatures, the Vulpix and the Ninetales, are undoubtedly derived from the mythical nine-tailed fox. Shippo and Kirara from Inu Yasha are kitsune as well, as is Ryutarou from Pom Poko. A shapeshifting kyuubi no kitsune named Sakura is one of the main characters of the anime Hyper Police. Also, the spirit of a Kyubi Kitsune was sealed with Naruto.

There is a Japanese dish called kitsune udon, a type of udon soup so named because kitsune are said to have a particular fondness for the baked tofu (atsuage) it contains.

Kitsune, or fox, grow in power as they age. After a milennium, they grow a tail and gain the ability to shape-shift and possess people. The most powerful foxes are those who reach the grand old age of 10,000 (the so-called nine-tailed fox). When a kitsune gains nine tails, its fur becomes silver, white, or gold, and it gains the power of infinite vision. In Korea, a fox that lives a thousand years is said to turn into a kumiho (literally "nine-tail fox"), but the Korean fox is always depicted as evil, unlike the Japanese fox, which can be either benevolent or malevolent.

In anime, kitsune are sometimes depicted in a manner similar to non-furry catgirls, usually as female, seductive, and fond of alcohol.