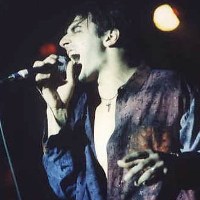 Johnny Gioeli, born on the 5th of October 1967 in Brooklyn, New York, is currently the vocalist of German guitarist Axel Rudi Pell and bands Hardline, Accomplice and Crush 40.

Johnny's musical career began in the early 80s after forming the band Phaze with his older brother, Joey. The band underwent reform and he started drumming with the band Killerhit in 1983 at the age of 17. Sharing vocal duties with Joey the four-piece act hit the East Coast club circuit with an enormous amount of success, earning enough by 1987 to purchase their own lighting rig, truck and tour bus (purchased from Jimmy Buffet).

Re-locating to Hollywood, Killerhit hooked up with Poison's Bret Michaels. The singer gave them his former publicist Debra Rosner's number who instantly became the band's manager. Realizing the need for a front man, Johnny vacated the drum stool for center stage, Las Vegas native Darek Cava taking his place behind the drum kit. Soon after the band switched names to the more appropriate Brunette. The band broke The Doors and Van Halen's single-weekend attendance records on the Sunset Strip in Hollywood CA. Their sensation soon brought attention and admiration to the recording industry. They were courted by top record executives for months. The band had built a loyal world wide fan base. Differences began to develop in the Brunette camp before a recording deal could be secured, and the band decided to call it quits in 1991. He then he started working with his brother Joey on songs for an album they were going to call Brothers. However, Neil Schon, Journey's guitarist (who was dating their sister at the time) met with them and asked if he could play with them, and they agreed. Then in 1992 they released their first effort, entitled "Double Eclipse," and called themselves Hardline which was moderately successful but not enough to get into the mainstream, especially considering its post-Nirvana release. After this they began writing songs for a second album but once again called it quits while recording the songs due to troubles with their manager and Neil Schon. Johnny had all but disappeared from the music scene until, in 1998, German guitarist Axel Rudi Pell found himself in need of a vocalist after the departure of Jeff Scott Soto. Axel had admired Johnny for a long time, saying he always thought Johnny's vocals would go well with his music. Axel eventually found means of contacting Johnny and flew him to Germany to record vocals for his Oceans of Time CD, which up to date has been considered as one of the best Axel Rudi Pell albums so far. He is now the permanent lead vocalist of the band and shows no signs of leaving.

After considerable success of their debut CD, Double Eclipse, the band was dissolved for 10 years during which Johnny and his brother followed a career in internet business. After he met with further success in the band Axel Rudi Pell, Johnny and his band Hardline returned to release their second album entitled "II" that was released in 2002 which was followed by the live CD/DVD in 2003, named "Live At The Gods 2002". In April 2009 came "Leaving the End Open", followed just three years later by "Danger Zone" in May 2012.

He has been working with video game composer and musician Jun Senoue and has delivered his vocals in the Sons Of Angels CD, Thrill Of The Feel, released in 2000 and he is currently in the band Crush 40, where he sang several songs in recent Sonic the Hedgehog games, such as the theme tune Sonic Heroes, a bright, melodic song and in contrast What I'm Made Of, a distinctly dark, energetic hard rock song with metal sensibilities for the final struggle of the game. He was also the vocalist for the songs Open Your Heart, the main theme of Sonic Adventure (though it was originally recorded with a different vocalist), Live & Learn, the main theme of Sonic Adventure 2, I Am... All Of Me, the main theme of Shadow the Hedgehog, and Never Turn Back, the ending theme from the same game. His latest work with Senoue is a cover of Magna-FI's "All Hail Shadow", and writing the chorus lyrics for Sonic the Hedgehog's main theme "His World". As well as writing the chorus for the main theme (Performed by Matty Lewis and Ali Tabatabaee), he also recorded a version of the song with Crush 40 (featured as a bonus track on the games official soundtrack).